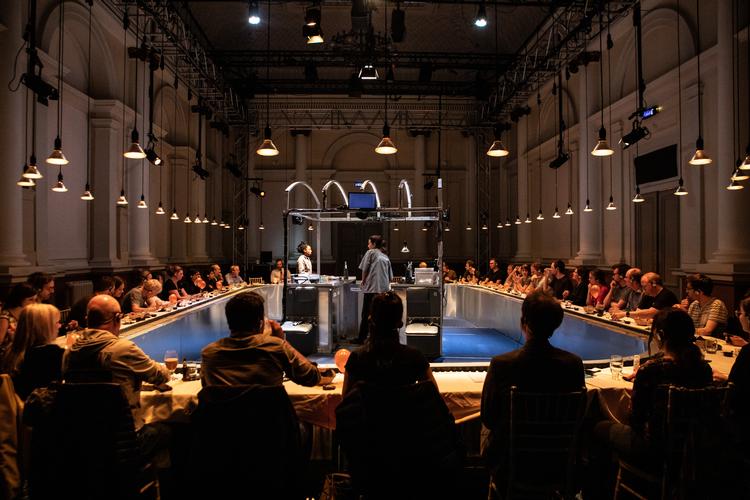 Fasten your seatbelts passengers and get ready for some turbulence for this novel immersive eating show will take you on a journey with a difference.

You’re on board an A380 from Beirut to London. There are 562 people on the flight but you’re the elite, sitting in first class.

There’s no boarding pass so you sit where you like in the circle, but it doesn’t matter where because centre stage is the set – the kitchen where the magic happens.

You’re introduced to the three cooks; chef Nora Schmidt (Georgina Strawson), sous-chef Agat Vachet (Ani Nelson) and newbie Luca Khoury (Craig Hamilton) and then one by one they cleverly introduce all of us, the passengers in the cabin – a new identity for us all – as a spotlight shines over us when it happens.

Nora has created the seven-course tasting menu called ‘Green And Pleasant Landing’ and what’s rustled up is a celebration of British food with some added twists.

The traditional food carts are nowhere to be seen instead the dishes are served in a much better way. You know when you go through airport security screening and you have to go through the laborious procedure of putting everything in your possession in those trays which are sat on rollers? That’s how the dishes are sent out to diners, one after the other. And as they come past you notice some without food but not empty – no – some of the trays contain things that any one of us would place in them – suntan lotion, keys, earphones – and the sight of the items generates a chuckle.

In between each course, we learn about each character, their lives, their loves, their losses, their passion and how they came to be on that flight. And it’s all this deep personal insight that makes this show so original. It’s clever, emotional, it touches you and it’s also fun.

There were a few criticisms though, just small things that would have enhanced this in-flight experience. There were no welcome drinks as you would be accustomed to in first class which was a bit disappointing. This is a pescatarian menu only and while airlines cater for all sorts of dietary requirements, this one does not. So if you’re like me and can’t eat something for any reason, you just have to skip the course but all the allergens are listed on the menu so you know what’s what. There were no teas and coffees at the end like you get after your meal on a real flight and the show seemed to end quite abruptly – I was still tucking into my dessert and when I looked up half the passengers had already left the plane.

But despite all of that, it didn’t take anything away from the actual performance. ‘Gastronomic’ really hit the mark and it was a great evening out. It’s on until October 12th and definitely worth stumping up the cash for this first class experience.