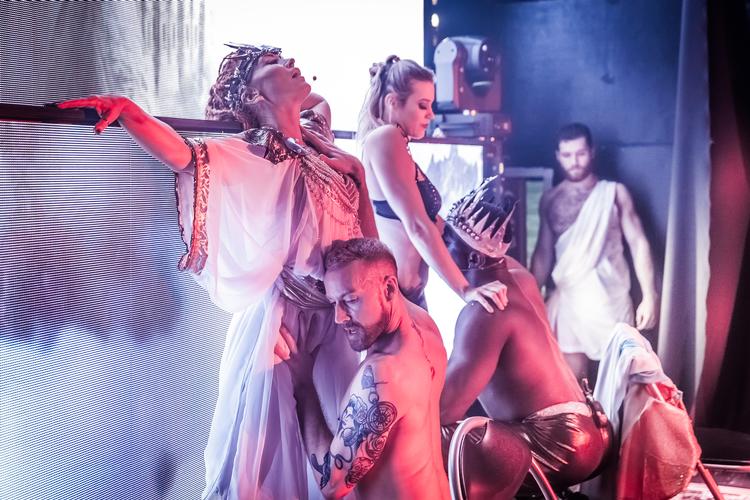 Zeus on the Loose is a fusion of musical theatre, circus and burlesque, aimed at adults who fancy watching a cheeky play inspired by Greek mythology.
It comes back to London after a sell-out run at the Camden Fringe. Mythical figures taking the stage include a scorned and angry Hera, beautifully played by Penni Tovey, who co-wrote the show with Emma Rollason, who also directs the show. She’s joined on stage by a funny, randy bisexual Zeus (Michael Afemare) and the sinister underworld guardian Hades. The latter is played by drag queen Vicky Vox, who is definitely one of the highest points of the show. She’s funny, over the top and outrageous, like all respectable drag queens should be. But she also brings amazing vocals and humour.

On stage a number of acts alternate, in a mix of cabaret, acrobatic archery and dance. Some stronger than others, although all manage in the end to make the audience laugh, especially when they are asked to moan and gasp!

The show is currently playing at one of London's leading nightclubs, Fire; the space includes a nice bar area, but the performance suffered from some technical issues with microphones and audiovisuals; teething problems for a venue new to this.

The show ends on a high and literally almost puts the venue on Fire. Recommended for a fun, cheeky night out.