Mother of him - Review - Park Theatre

A mother. Her son. His crime. 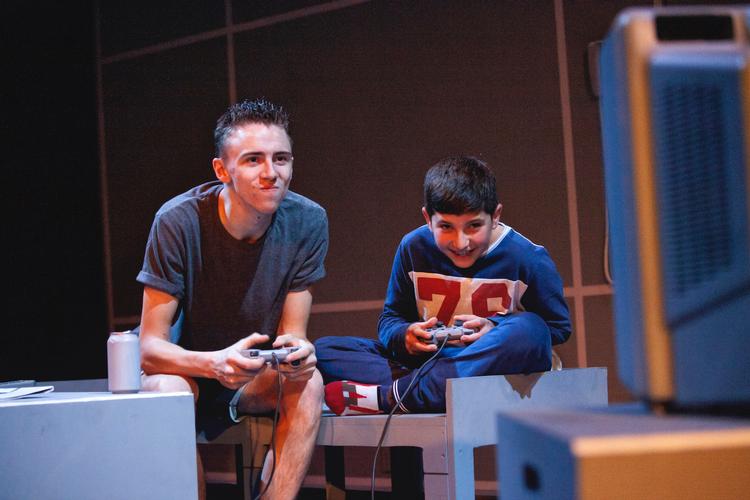 Toronto, 1998. Matthew (Scott Folan), who is seventeen, is under house arrest for raping three girls, which he never denied. Robert (Simon Hepworth) is his lawyer, and a family friend. He is patient, honest, loyal and very helpful to support the family through this difficult time.

Brenda Kapowitz (Tracy-Ann Oberman), Matthew’s single Jewish mother, is trying to get on with her professional life and at the same time to protect Matthew and his eight-year-old brother Jason (Matt Goldberg/Hari Aggarwal share the role) by the storming attention of the media.

Based on a true story, Mother of him, by the Canadian playwright Evan Placey and directed by Max Lindsay, has many strengths. Lee Newby’s stage design is impressive. And grey. Grey are the furniture, the phones, the walls, the books, the milk cartons. Everything is grey. The lack of colour might be the metaphor of the claustrophobic situation that the family is experiencing.

The cast is excellent, especially Tracy-Ann Oberman, a mother who struggles to understand how and why her son has done something inexplicable. Scott Folan is excellent at playing an otherwise stereotypical typical teenager: no one really knows what it’s in his mind; surely, there are anger, guilt and confusion for what happened and for what it is going to happen.

The sound, by Fergus O’Hare, uses radio broadcasts and a few songs of that time.

The background of the crime is not explained in much detail. There is probably a reason for this choice: the play is more about Brenda and how she copes with the whole situation – and not just emotionally. It is more an exploration of the repercussions for the people around Matthew, than about the horrible crime itself.

What happens if your son becomes a monster? Can a mother love him, even if he has done something terrible? Are parents always accountable for the choices of their children?

Mother of him is an emotional journey and a deep exploration of how far can the love of a mother go.

It runs until 26 October.  Tickets:  here