The 1988 famous movie is now a West End musical 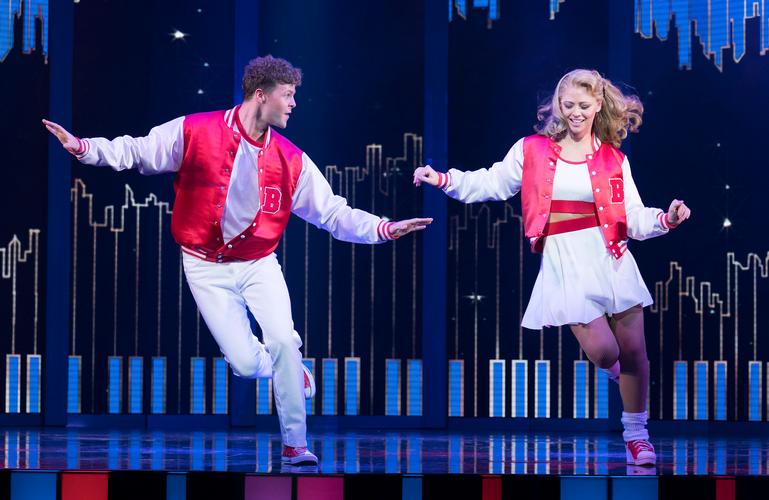 Dominion Theatre has been home to We Will Rock You and Bat out of Hell and now hosts the eight week run of the new musical Big.

Set in 1988 Big the musical delivers big performance. The decor inside the cross-section of the houses that dominate the stage in the home scenes is typical of the era. Young Josh's bedroom wall adorns posters of E.T and Goonies popular films from that decade which are clearly positioned for the audience to see.

With an ever-changing set and a revolving stage, the workmanship that has gone into creating this staged version of Big is incredible. From the street scene in the suburbs where Josh and Billy live to the office scenes with corridors in the background and the beautiful night time city views complete with a shooting star. Production designer Simon Higlett's vision in this production is extremely impressive.

Musical director Jeremy Wootton in collaboration with music by David Shire and lyrics by Richard Maltby the music scores accompanying this performance fit nicely into the scenes. Although at times some of the scores sound similar just with different lyrics added which can be off-putting.

Jobe Hart in the role of Billy has been perfectly cast. He holds the stage each time he performs and whether he is acting, singing or dancing this multi-talented young actor brings so much passion and energy into his character and certainly has great potential for the future.

Matthew Kelly as the boss of the toy factory George McMillan sets the scene as an ageing boss who is losing business fast as he listens to bad advice from his workforce in the toy producing offices. The appearance that he has little idea of what kids want or that he knows what is going on around him leaves little doubt that once older Josh (Jay McGuiness) arrives in his toy store that business is about to change.

McGuiness former vocalist from the boy band The Wanted has been cast really well as the older Josh. His boyish good looks and charisma keep the audience aware that he is playing a thirteen-year-old boy. Wendi Peter's former Coronation Street star plays Mrs.Baskin the writers have given this character a much larger role in the musical than the film version.

Director and Choreographer Morgan Young have skillfully created some eye-catching dance routines and musical numbers. However, the iconic piano scene where older Josh steps on the keys to play out a tune in the toy store isn't particularly in time with the orchestra. Just suspend your disbelief and enjoy the show.

The message from Big either in film or musical format is that you should be careful what you wish for and no matter how tempting it appears to be to a child to be all grown-up, enjoy your short childhood with your peers as being grown-up is permanent!

One thing is very clear watching this musical adaptation production of the film is the energy and enjoyment that the entire cast project from the stage. Each cast member appeared to be giving their roles everything they could and thoroughly enjoying themselves. It is a great family musical which is definitely worth going to see while it's on.

It runs until 2 November. Tickets from £ 30 here