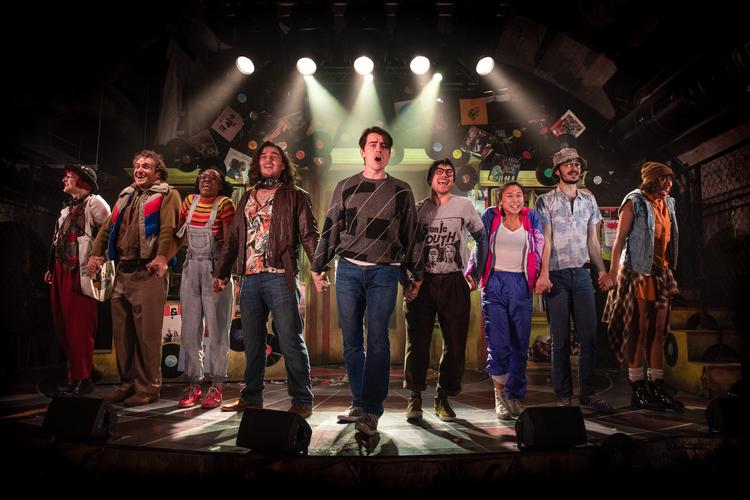 The new Turbine Theatre opens with a revival of Harvey Fierstein’s classic play Torch Song at the Battersea Power Station. The new venue sits amongst shiny restaurants by the river and welcomes its guests to this 200 seat theatre with a small ambient bar and a programme driven by energy for new work and reimagining classics. At the helm, Paul Taylor Mills as Artistic Director, has gathered a strong creative team and a cast to mark the opening of the new Turbine Theatre with a bang.

We are greeted by Judy Garland’s The Man That Got Away and Lesley Gore’s You Don’t Own Me when we walk into the railway arch turned into a studio theatre. These torch songs sets the mood and transport us backstage of the International Stud bar in the late 1970s where we meet Arnold (Matthew Needham). He wittily remarks about the struggles to find love in Manhattan in his opening monologue and swiftly armours himself in sequinned drag queen gown and quips that hide his true yearning for love and fear of loneliness. Sound familiar? This play, written in the late 1970s, still echoes very true in today’s dating world, especially amongst gay relationships. Arnold only wants love and respect, striving only to be his authentic self and expecting the same from everyone else, including his bisexual lover Ed (Dino Fetscher), who is struggling to come to terms with his feelings for Arnold and his girlfriend/wife Laurel (Daisy Boulton). Due to Ed’s shortcomings, Arnold seeks comfort in a new relationship with Alan (Rish Shah) and plans adoption until tragedy strikes. In the end, Arnold learns about the challenges of single parenthood, fathering a teenager David (Jay Lycurgo) whilst Arnold’s Ma (Bernice Stegers) is shocked to find his son’s roommate to be his son. There is still beacon of hope cast upon Arnold when Ed suggests a life together, but can he be trusted?

Fierstein has crafted the piece beautifully in three short plays: International Stud, Fugue in the Nursery, and Widows and Children First. Originally written as The Torch Song Trilogy, which premiered at Actors’ Playhouse in New York in 1982, playing for over four hours has been expertly revised to pack the emotional punch by the playwright himself into a play of just under three hours. Each play has a distinct role in the proceedings. International Stud serving mostly monologues and split scenes between Arnold and Ed, enlightening Arnold’s world and issues. Fugue in the Nursery takes us deeper into Ed’s world, and his discomfort in being confused about his sexual identity. As Arnold and Alan visit Ed and Laurel, scriptural fugue ensues with more split scenes and moments from this weekend getaway in hell. Worlds finally collide in the third part when the meaty dialogue fully kicks in, mostly fuelled by the brilliant star turn of Bernice Stegers as Ma.

The director Drew McOnie, mostly known as a storyteller through dance (On the Town, Strictly Ballroom, Jekyll and Hyde...), steps outside of his comfort zone with this play and manages to display heart and dramatic growth in his directing style. He has assembled a terrific cast of newcomers and seasoned actors. This production holds the intensity mostly throughout, offering moments of great comedy and tragedy but McOnie loses his grip at the end of Play 2 when Fierstein jumps around with time and place in his script, creating a montage of voices that is slightly confusing in McOnie’s production. Luckily after the interval, Bernice Stegers takes the reins as the commandeering and overbearing Jewish Ma, so these slight mishaps can be easily overlooked.

Ryan Dawson Light wrings everything out of the tiny stage with his design, and brings it to life with clever imagination, transforming the stage three times to great effect. Although the venue itself as a tunnel space works against the intimate nature of the play, placing audience members far away from the actors. Nods must equally be given to Dino Fetscher and Jay Lycurgo for their skillful work on the stage. Daisy Boulton as Laurel and Rish Shah as Alan have been given the toughest roles, as we are introduced to them so briefly in Play 2 but they still leave an impact.

However, the backbone of the piece is Matthew Needham whose portrayal of Arnold is touching and well measured. Needham has a great sense of comic timing, like in the hilarious monologue scene at the darkroom of International Stud, and an ability to portray real vulnerability, like in the scene with his foster son on the park bench. Like the torch singers Arnold idolises, Needham epitomises the joy, tragedy, and mysterious beauty of this Fierstein’s meticulously crafted character. And Arnold, don’t worry, this portrayal glows even in the dark.

It runs until 13 October.