Falsettos - Review - The Other Palace

The musical runs for a limited season 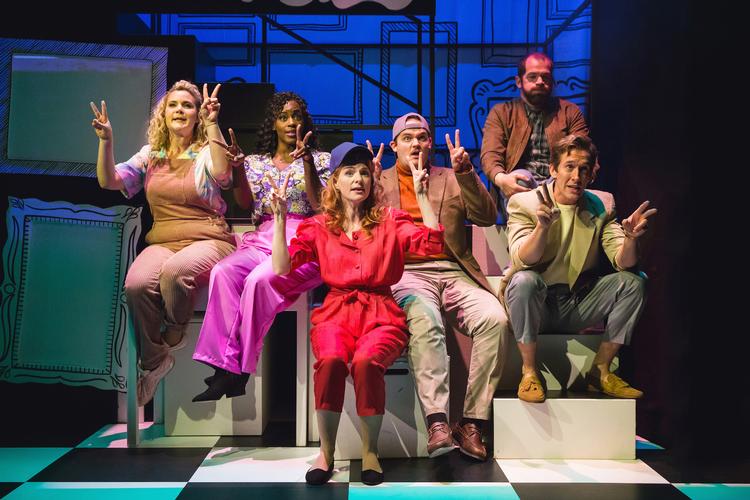 They say you can fall in love with anyone by staring into their eyes for just 4 minutes. Well despite staring at this bundle of characters for nearly three hours there were still no sparks by the curtain call.

When our rich, narcissistic, wholly unlikeable protagonist, Marvin, leaves his wife and son for an uncovered desire, in the form of a trendy homosexual man, his psychiatrist swoops in to save the abandoned family and they all try to figure out love, life and what it means to mature.

Written by James Lapine and music and lyrics composed by William Finn, this rock opera, although rightfully shocking and powerful in the 90s has now been brought to the west end stage to fall flat on perfumed ears. The words were launched at the audience, quite bamboozling at times and some meaning may have been lost in the process. Instead of feeling intricate, the web of relationships and plot points felt confused, the characters didn't know what they wanted and mayhaps the audience didn't know what they wanted from them either.

A stand out performance from Laura Pitt-Pulford as Trina since her hysterical rendition of Finn's "I'm Breaking Down" demonstrated beautiful comic timing and flaunted the best quality of this production; moments of real, sobering heartache paraded as defence mechanistic hilarity.

Albert Atack (one of the four actors to take the role of Jason, Marvin' s son) was an absolute joy to watch; a really challenging feat, for a young actor, made to look easy. The character of Jason arguably had the most depth in variation, a young boy arduously growing out of his "falsetto" years and struggling to know what kind of man he should become, or what it even means to be a man. His complicity with Joel Montague as Mendel the shrink was delightful, the pair gave heart to scenes that wrestled to find meaning or relatability.

Overall the music was well-written and skillfully performed but forgettable. The better tracks were let down by any solid grounding, the humour was punchy but not overly warm nor emotionally evocative (possibly due to every song appearing to be in major). "Unlikely lovers" was a  stunning composition with enchanting harmonies but lacked importance because half of the characters were chucked in nonchalantly in the second act with seemingly no purpose.

In PJ McEvoy's set design, the proscenium is adorned with LCD frames creating a really simple but effective way to change location as well as plain white wood being transformed into multiple household furniture items by the athletic cast; an inventive mise en scene which may otherwise have been quite prosaic. Tara Overfield-Wilkinson worked the direction fluidly around the stage with a few moments of aimless wandering but this may be ironed out as the run progresses. All this played out on a checkerboard mild thrust staging that worked as a blank canvas for Nic Farman's lighting design which rainbow-washes the cast and brings the scenes to life making for a very gay backdrop.

Regardless of how difficult it is to satiate an appetite for something new, vibrant and meaningful, the talent of the cast and crew involved is undeniable. Falsettos is a fast-paced rollercoaster of musicality: not very many twists and turns, and you get off exactly where you started but at least you don't feel sick.