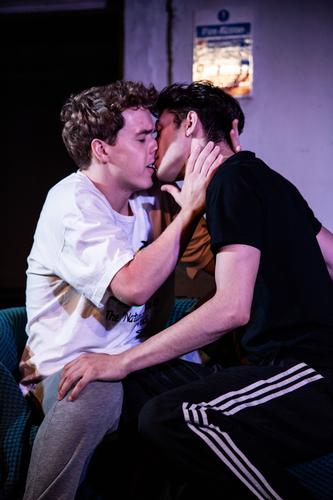 World’s End is a new play written by James Corley. Set in London in the late ’90s, amid the horror that occurred in Kosovo, the story follows two single parents, their 19-year-old boys and their journey towards the end of the millennium. Ylli and his son Besnik are Kosovar Albanians living in the Worlds End estate in Chelsea. Viv and her son Ben move next door to Ylli and Besnik, and the story begins.

Ben and Besnik (Tom Milligan and Mirlind Bega) were fantastic. Their characters had a lot of chemistry together. Their scenes were an easy watch.

Bega created a character that you couldn’t help but like. Besnik was cool and suave, and you could see how easily he could break down Ben’s ‘guard’. His interactions with Milligan during their Nintendo scenes were brilliant. Milligan was outstanding in his characterisations. Everyone knows someone like Ben, a nervous ‘worrier’ as Viv puts it. The audience didn’t see Milligan performing as Ben; we saw Ben. The character was so cleverly executed that the audience lost themselves in his performance.

Nikolaos Brahimllari as Ylli and Patricia Potter as Viv had more challenging plot points to accomplish, but something seemed to miss the mark. While they portrayed their characters well, the scenes between them seemed under-rehearsed and very ‘staged’. Considering their scenes were the scenes that pulled the narrative along, and had some incredibly difficult moment to portray (which were handled well and delicately by the entire cast), there just seemed like something missing in these characters. I am unsure whether the blame should lie with the director or the writer, but either way, it had a massive impact on the show.

This production was James Corley’s playwriting debut, and while certain aspects of the play were good (as mentioned above, the Nintendo scenes between Ben and Besnik were great), unfortunately, there were massive glaring plot holes. Except for ‘The Legend of Zelda’ and the issues in Kosovo used to set the time in late 1998, there were no other clues during the performance to move the time along. The rest of the play could have taken place in the space of a couple of days or a couple of months. It almost felt the play was unfinished and still in the editing stage.

With a little bit of work, this play could be excellent, but in its current manifestation, something has missed the mark.

It runs until 21 September