Once on this island - Review - Southwark Playhouse

Under the sizzling sun of the Caribbean 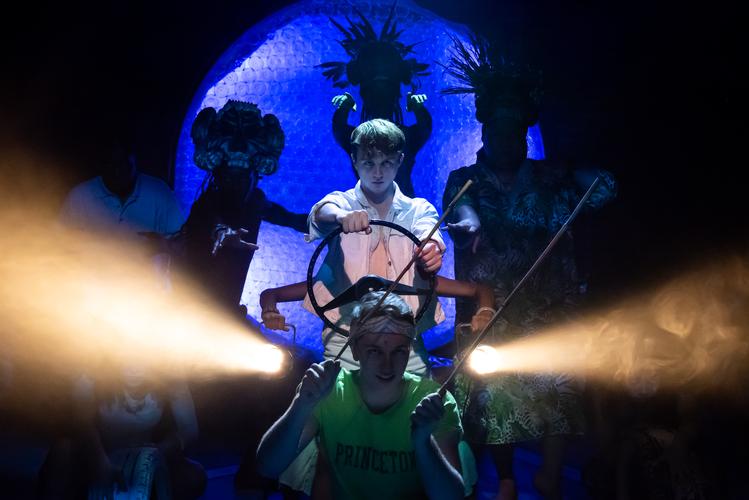 Once on this Island is, essentially, the loose re-telling of The Little Mermaid.  Miles Away from the saccharine Disney world plot, this version is captivating.

Set in the intimate space of the Southwark Playhouse, Ti Moune (Chrissie Bhima) is the chosen girl, an orphan who is destined for greater things with the capacity to love so deeply and with integrity and trust that it is almost painful to watch such is the depth of her feelings. I mean, would you promise your soul to a death demon to save the life of a stranger?  Such is the capacity for Ti Moune to love.

It is not an unusual story, poor girl falls in love with rich boy, whom she has a fleeting glimpse at and decides that her heart resides in his, together forever. Guided by the Gods they overcome their difficulties, all set to the sultry beats of the harmonies which deserve more than a passing nod. The staging is apt enough given the tight space and the choreography is seamless. The cast is cohesive and meld well and it is clear to see that The British Theatre Academy are invested in their characters.  It was delightful to observe that the cast were having fun with this production.

The high(light) for me is the lighting of the piece (Andrew Exeter).  This is not something that I would usually comment on, per se, but every mood has been reflected beautifully indeed showing that there is light in shade in abundance. The songs were performed with warmth and sold in a spellbinding way, under the musical direction of Chris Ma. Another point of note is that it is slightly immersive.  Indeed at the end (and not to give away any spoilers) tapes are provided to the audience to represent branches of a tree allowing us on stage to feel the warmth of the piece on a salient level.

OOTI, directed by Lee Proud, wholly deserves to be transferred to the West End.  This is a moving piece of theatre that should be placed within grasping reach of anyone who wants to remember what it is like to be in love and the crosses that we all bear when it comes to doing what is considered the "right thing", although the right thing, and the hardest thing are often the same thing. Bravo to portraying this with depth and courage.