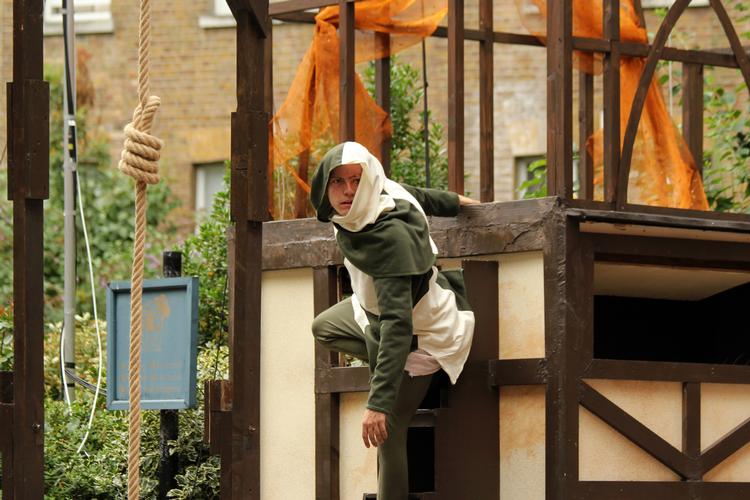 Victor Hugo's 'The Hunchback of Notre Dame' has been famous through the ages due to many different re-tellings. The most notable version is possibly the Disney film, which tells the story of Quasimodo through a much lighter veil than the original tragic tale. Iris Theatre has travelled more towards the light-hearted re-telling but kept aspects of darkness along the way.

The concept of the piece was fascinating, with the production beginning with an introduction of the actors in a travelling performance group tasked with telling the story of 'The Hunchback of Notre Dame'. The idea of the travelling group worked perfectly to allow the players (and audience) move from scene to scene, instead of changing the scenery each time.

Along the way, the audience was introduced to many characters portrayed by the six players (and a few audience members). Out of the six players, there were two that completely stood out. Robert Rhodes as the titular Quasimodo (and others) and Katie Tranter portrayed Pierre, Fleur-De-Lys (and others). Both Rhodes and Tranter projected comedy into their roles to help keep the light-hearted family-friendly re-telling of this story in the forefront. They also excelled in the immersive aspects of this production. This immersion included getting audience members to move swiftly between scenes, while still engaging with them to keep the flow of the production, as well as getting the audience involved with certain aspects of the show as a whole. Tranter and Rhodes also stood out because they had excellent vocal projection, allowing the audience to hear their dialogue at all times, despite the production taking place outside next to the very noisy Covent Garden.

A lot of the problems arose because it was challenging to hear members of the cast over the surrounding noise. With better projection from the remaining players, everything would have been that much better.

Iris Theatre has managed to create almost an entirely new genre of theatre. Not quite a traditional theatrical performance, but not wholly immersive theatre either. However, what they have achieved is a great evening’s entertainment that can be enjoyed by the entire family.

It runs until 1 September. Tickets: here