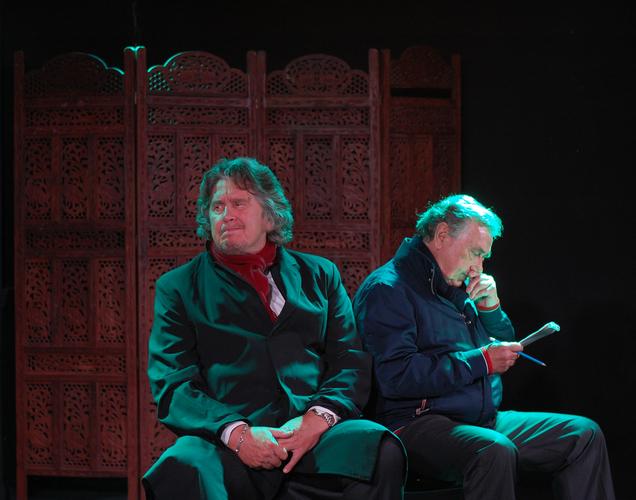 A new lyrical revue from Nomadic Theatrical Productions’ writer-director Clive Moffatt, “Nostalgia” is a narrative tour of various pasts told through the different recollections of a vibrant ensemble cast of characters, exploring the meaning, importance, and relevance of our memories of years gone by, especially in older age, and in the remembrances of young adults recalling their halcyon schooldays.

Clive Elliot, central to the cast as a flamboyant narrator, proves a highlight as a great storyteller, by turns funny, compelling, warm, and sincere with a strong, visually distinct stage presence. Liam Weller provides a nice contrast as a younger, knock-kneed schoolboy, bringing charm and innocence to his rose-tinted recollections of school, and Jayne Beaumont as The Woman gives one of the most powerful and emotive performances, recalling a deeply troubled and traumatic past. Nick Rutherford and Ian Recordon meanwhile bring their own presence and emotive command of the text to the work nicely.

The writing itself, whilst having isolated moments of genuine, evocative affect and good craft, can sometimes feel disjointed, as though the series of monologues which bind the work together do not form a single coherent narrative so much as a series of writing exercises on a theme. Clive Moffatt's light-touch direction together with Gwenan Bain and Chuma Emembolu’s lighting and sound, though, help to bring things together into a coherent whole, with Emembolu’s sound direction, in particular, making good use of some musical staples of classical and big band fare to evoke the titular nostalgia for a different era.

More an avant-garde exercise on a theme than anything particularly ground-breaking, certainly, but enjoyable performances and affecting writing help to bring everything together into a consistently interesting, reflective evening of theatre.

It runs until 3 August