A production for all the family 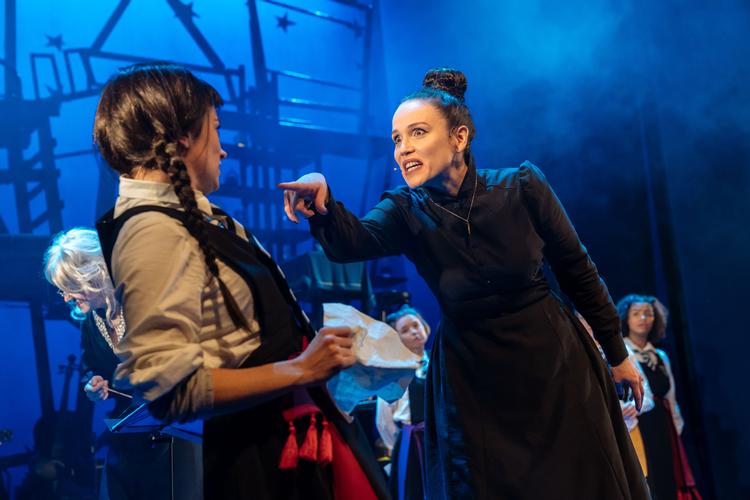 After unbelievable success in literature and television, it was time for Jill Murphy's concoction to grace the stage with this magical new stage adaptation, directed by Theresa Heskins. Touring the country earlier this year has now led to the show settling down at the Vaudeville over summer until September- perfect timing to be indulged upon by the little ones.

A couple of minutes before the show began, cast members came amid the stalls to greet some of the children in the audience; a small gesture that provided a more immersive experience for those involved.
Providing a bout of nostalgia for the grown-ups and an engaging wonder for the kids, The Worst Witch has it all. This production, adapted by Emma Reeves, uses flashbacks from the present day when she was first accidentally adopted into Miss Cackle's Academy for Witches, setting the action as part of a play. Much like the widely popular novels, the performance follows the mischief and mayhem caused by the wannabe witch, Mildred Hubble. Played by Danielle Bird, her unique voice and child-like innocence within her character project well when giving Mildred her well-known unorganised yet cheeky personality... she could possibly do with a less synthetic wig though!

A standout performance was that of Rosie Abraham, who plays Mildred's conceited classmate Ethel: she often sparks giggles amongst the audience with her arrogant remarks. Consuela Rolle does an excellent job too, as the feisty and mischievous Enid, who brings a modern touch to a classic story. Overall, the casting was done immaculately, with cauldrons full of talent between them all.

Alongside some jokes to dabble with adult humour, but leave the children unscathed, there were several Harry Potter references too, to add that element of extra joy when the intertextuality is understood, and give the adults something to look out for.

The use of aerial work (overseen by Vicki Amedume) generates an enthralling scene when Mildred and Maud- played by Rebecca Killick- take to the skies for a broomstick flying display. With all mouths agape, everyone becomes engrossed in the magic they're witnessing before their eyes. Puppetry (designed and directed by Paschale Straiton) is also a significant part of The Worst Witch, as a way of effectively bringing Tabby the cat to life.

As a musical, it's obvious that the songs are likely to be the pinnacle of the performance. Despite not having a huge number featured here, those included were fun and catchy, leaving the audience asking why there's not a soundtrack out yet and still singing while leaving the theatre. The live band on stage throughout were admirable, particularly because they didn't just produce the backing track for the entire show, but made all kinds of weird and wonderful sound effects to compliment the goings-on.

Though some could argue that it may have dragged a little in places, a quick glance around depicted all the little eyes of the future witches and wizards glued to the stage, fixated throughout and clearly enjoying the performance regardless. At moments near the end, it seemed to drift towards becoming pantomime-style, breaking the fourth wall and encouraging a little bit of audience participation. In this case, however, I think it is a great way to keep the kids enchanted right until the very end.

For an utterly spellbinding adventure for both adults and children alike, make sure to fly yourself down to the Vaudeville this summer and catch The Worst Witch before it vanishes.

It runs until 8 September. Tickets from £ 31: here