A new case for Sherlock Holmes 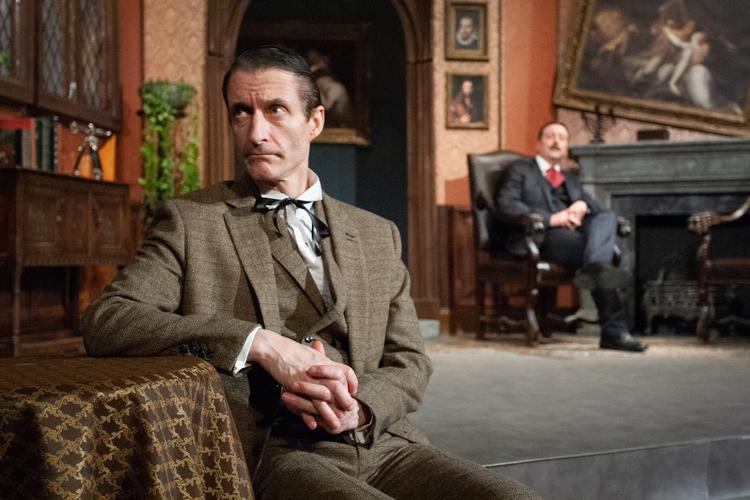 A new case is waiting for the detective Sherlock Holmes and his inseparable friend John Watson. The play Sherlock Holmes and the Invisible Thing, written by Greg Freeman and directed by David Phipps- Davis, is currently on at the suitably vintage Rudolf Steiner Theatre, just less than ten minutes away from the museum dedicated to the renowned investigator and the big statue greeting at the entrance of Baker Street station. The show is a funny take on the traditional whodunit stories, particularly curated for what regards the costumes and set design.

Holmes (Stephen Chance) is called by the smart Miss Lucy Grendle (Vanessa-Faye Stanley) at her mansion, inherited by her father whose business is still covered by a veil of mistery. The summon occurs on request of Inspector Peacock (Doug Cooper), who needs help to resolve a murder, or better, three killings, apparently connected. Is there a poltergeist infesting the house, is Holmes confounded for once by soft emotions, or is there just an ordinary culprit that is making fun of the company?

The plot doesn't live up truly to the expectations of Conan Doyle's romance, but the investigation flows nicely. It would have perfectly worked with more of a grip, escalating that extra amount of suspense, whereas the end leaves with a slight taste of satisfaction. There are other elements though that are highlighted, but mostly they remain to the speech level, rather than embedding them as part of the narrative: like the prodigy of imaginative memory, or the obscene slavery trade continuing in the obscure alleys of London, and the limps and benefits of being perfect.

The lines have their humorous effects, but it is actually Watson’s expressions that give the right push to them. Philip Mansfield is wonderful in his role, from the dramatic movements to the calibrated pauses. Stanley is also another cast member to note: her stands for recognition and her subtle cat-and-mouse play with Holmes is a tender set of sequences on stage. The characters in general bears the distinctive symbols of their role, without moving excessively to more innovative approaches.

The careful selection of props on stage makes wonder whether there have been more than one visit to the nearby exhibition to source the scenography.

Overall, the show could make for a delightful entertainment, not too committed, but a light going out in a period-matching venue.

Sherlock Holmes and The Invisible Thing’ is at Rudolf Steiner Theatre until the 18th August.  Tickets: here