Games for Lovers - Review - The Vaults 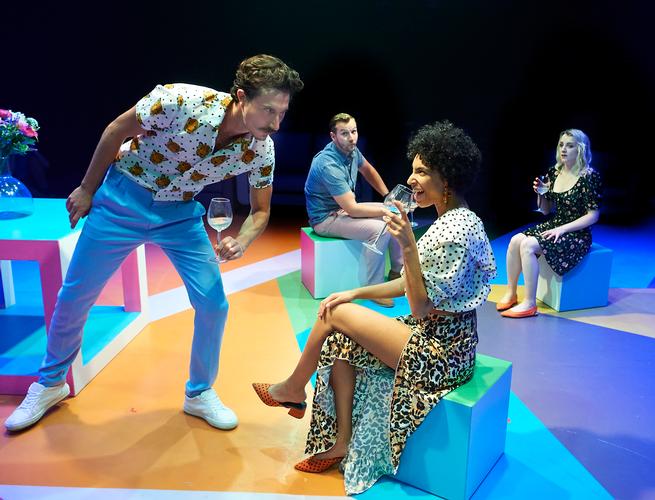 Love. It is all around us. According to some famous songs, it is like oxygen. Love is all you need. It can drive a person crazy, and at the same time, be the most fantastic thing in the world. The Vaults are currently exploring love in Ryan Craig's new comedy 'Games for Lovers'. This new production brings the value of relationships and the dating game into real-life experiences.

This play is incredibly well performed with each of the four actors creating charming and relatable characters. Everyone knows someone like each of the players in this Game for Lovers. Tessie Orange-Turner (BBC's Casualty) plays Jenny, the girlfriend jealous of her boyfriend's relationship with his best friend. The boyfriend, Logan, portrayed by Calum Callaghan (Mr. Selfridge), who is oblivious to see his feelings for Martha (Evanna Lynch – Harry Potter Series). Martha is the shy young girl that always gets 'friend-zoned' because she is too scared to share her feelings and get rejected. Completing the quartet of actors is Billy Postlethwaite (Chernobyl) as Darren, the grossly over-confident player, but in reality, is just as vulnerable as everyone else.

The characters' stories are intertwined in a complicated way where everyone is linked and impacts everyone else's stories. Each scene plays out a different, but hilarious, scenario which builds to the evening's eventual climax. The comedy highlight of the evening came in the form of a lesson in 'pulling' between Darren and Martha (Postlethwaite and Lynch).

Every scene is more outrageously hilarious than the one before. This is a relatable yet entertaining evening about how the Game of Love is played.

It runs until 25 August