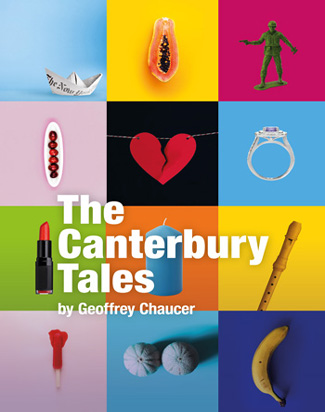 Written and adapted by Ian Hoare, Lucy Moss and  Angharad Ormond, this modern-day retelling of some of Chaucer's most-loved Canterbury Tales comes whistling into London's streets with a host of percussive passengers ready to regale audiences with a montage of mishaps.

Opening on a delayed train to Canterbury West wardened by the warm northern tones of Alexa Wall as Harriet Bailey, the Train Guard, the group of travellers are encouraged to entertain each other with storytelling. It is a rowdy route as the audience are careened through farcical affairs and sombre scenes, cleverly composed to keep the emotions guessing.

With never a minute off-stage, the stamina of the multiroling cast did not fail to astound as they transformed, again and again, using synchronised physical imagery to convey the poignant relevance of each character's tale in today's society.

Technical effects were minimal as the actors became the orchestra as well as the set; only using props and costume disguised as their luggage to add little details to the scenes.

Evoking laughter, tears and questions, there's something for everyone in this updated production that left it's audience humming catchy lullabies and challenging the hegemony.

It runs until 20 July. Tickets: here