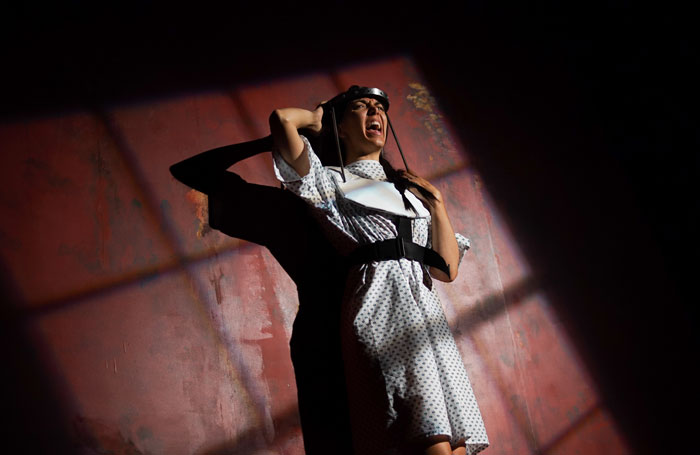 It is an absurd trip the one taken by the protagonists of Lunatic 19’s. In it, playwright Tegan McLeod instils the senseless and unforgiving treatment of many migrants deported from the States to the South. With nineteen screws in her head for keeping in place her spinal column after a nearly fatal car accident, Grace (Gabriela García) is dragged in the back of a van with limited access to food and sanitary services, in a blinded journey from Kentucky to Mexico. Having left the country when she was just a little child, the woman is now abruptly forced back, like a criminal, because of an unpaid rental car fine. Alec (Devon Anderson), the immigration enforcement officer in charge of her, is distrustful, until, slowly, he starts to see the human.

The pace is tense. The interactions are continuous, with few pauses and random moments of humour, to relieve from time to time the strain. Grace is very strong, there is not enough space to pity her, rather to stand next to her: almost deprived of her childhood, she has had her battle with society and with her body, which, despite being tough enough to survive a road crash, seems not able to bear the fruit of womanhood, to complete the delivery of a so-long yearned bundle of joy. Gabriela García is brilliant in her performance. There are not soft lines and her facial expressions, in the dialogues, become inflamed with anger and contrition, but not defeat. Devon Anderson is the sturdy perfect companion on stage: although the major transformation is in him, there is no fairy tale colouring to the story. The opening to the other is very gradual and still, until the end, is tarnished with suspicious – only partially well-founded. It would be hard to describe it as the narrative of a change or learning to trust your fellow human being, rather as the realization of the shared scars we all carry.

Swamped in a Rothko-style red, the set is straightforward, trying to give a backdrop matching the inner wounded spirit of the protagonists. What strikes, because so seamless, is the sound design. This would not normally be the first thing to be noticed, unless it goes really wrong. The sounds added here and there, subtly, recreates the different sites, making the mono-colour scenography easily adaptable to the different scenes and immerging the theatregoers within the landscapes proposed.

With Lunatic 19’s, the audience is taken not on an easy journey, neither on a touching sappy trip, but it is all worth it.

Lunatic 19’s is at Finborough Theatre until the 3rd August. Tickets: here