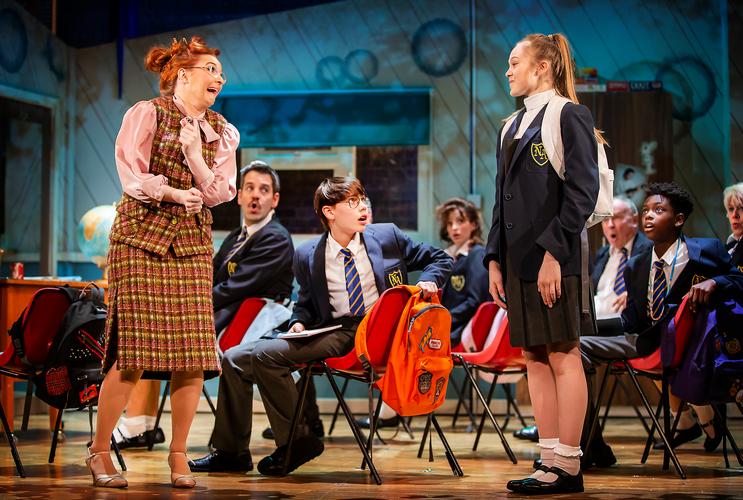 The Secret Diary of Adrian Mole, Aged 133/4 is not actually that new a piece having started life in Adrian’s (and original author Sue Townsend’s) home city of Leicester at the Curve Theatre. Jake Brunger and Pippa Cleary’s adaptation of the first book in the Mole saga is pretty faithful to the original in terms of content and of tone and together with director Luke Sheppard they have been developing and refining the show since the first production in 2015. Their care, attention to detail and, yes, love for what they have been doing, clearly shows in the end result.

Adrian is still the same bemused and beleaguered “intellectual” whose parents are in the middle of splitting up but is probably more interested in writing poetry to send to the BBC, mooning after Pandora (“I adore ya”) Braithwaite and avoiding the attentions of school bully Barry Kent…oh yes, and measuring a certain part of his anatomy. Other regular characters from the book also appear – best friend and potential love rival Nigel, Adrian’s opinionated Gran, the next door neighbour Mr “Creep” Lucas, disgusting beetroot-sandwich eating OAP Bert Baxter and so on. Even the dog gets in on the act in the guise of a nifty puppet created out of the ink-splattered pages of the protagonist’s diary.

Some ingenious production ideas keep the whole thing rolling along nicely. Various hidden compartments allow the set to be swiftly changed to diverse internal and external locations and costumes, setting and props are a pure nostalgia fest for those of us who lived through the early 80s. There is also some particular fun to be had from the adults in the cast doubling as Adrian’s classmates complete with aged wrinkles, moustaches and hairy legs. There was a tendency towards the ramshackle which was entirely in keeping with the mood of the production and which actually added to the fun. In fact I’m actually pretty convinced that this was all carefully orchestrated and therefore all the more impressive to keep it looking fresh. The pace was frenetic – quite rightly so – for most of the show but, particularly in the second half, some moments of quiet reflection and tense dramatic situations took the show out of the realms of it being just another comic musical. Adrian’s growing dismay with his parents’ antics with new unsuitable partners was actually quite touching.

The youngster playing Adrian was absolutely spot on - on the night I saw it Rufus Kampa did the honours. It is no mean feat to hold together a West End musical and yet this is what he did. If the other three lads (playing the part in rotation) are of the same calibre then it’s hats off to the casting director. I was equally impressed by Rebecca Nardin’s turn as Pandora; once again she leapt straight out of the pages of the book and was exactly as I had always imagined her. The other two children were Jeremiah Waysome as a cheeky Nigel and Jack Gale as menacing Barry (the latter also took care of puppeteering duties with the dog).

Most impressive of the adult cast was John Hopkins as a (surely psychotic) headmaster and the oily next door neighbour who steals Mrs Mole (Amy Ellen Richardson) away by tangoing her around her kitchen  - this scene was a particular highlight. However, I can truly say that the cast were universally very good and even the older adults threw themselves into proceedings with boundless energy.

I can’t say I found the songs particularly memorable but neither were they intrusive or dull; many were pastiches. And the lyrics were a riot of surprising rhymes of which W.S. Gilbert might have been proud. While I can’t say it was the best musical I have ever seen it was certainly one of the most exuberant and it’s great to see a truly British creation brought so vividly to life. Highly recommended.