A a theatrical love-letter to British sci-fi television 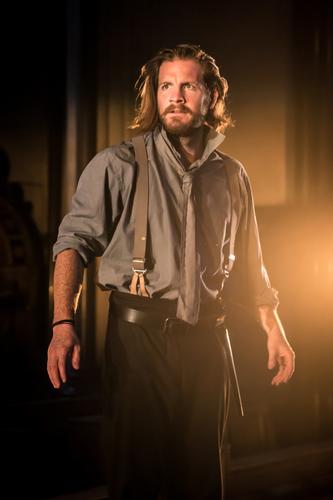 For fans of 70s sci-fi shows, Dark Sublime is the perfect watch. Marina Sirtis stars as Marianne, a fading actress with a CV which includes not only Emmerdale but former Thames sci-fi hit, Dark Sublime, which has since become a cult classic among younger fans. Nowadays, when she’s not spending her days running corporate training workshops for vets or doing the odd Radio 4 voiceover, Marianne catches up with her best friend Kate (Jaqueline King) over a glass of wine or two (or three). But when Kate begins a relationship with a younger woman, Suzanne (Sophie Ward), their friendship begins to sour, and so Marianne jumps at the chance to be interviewed by her ‘superfan’ Oli (Kwaku Mills). His attention provides her with the ego boost she desperately craves, and he convinces her to attend her first fan convention in Walsall. What follows is a trip down memory lane and a foray back into the sci-fi fandom as Marianne and Kate’s friendship is tested.

Dark Sublime is the debut play of writer Michael Dennis, and his love for sci-fi shows is evident, not only in his programme notes reminiscing about the likes of Blake’s 7 and Doctor Who, but in the gems woven into the play. In between scenes from the present day are snippets from a ‘lost’ episode of Dark Sublime, brought to life by Simon Thorp as Vykar, accompanied by talking computer Kosley (voiced by Mark Gatiss), and thanks to Andrew Keates’ direction this works. Dennis’ script is full to the brim with British humour and wit. For anyone who’s old enough to remember the 70s and 80s there are throwbacks galore, from pre-show adverts for a finger of fudge to mentions of Pebble Mill and TV-am.

At 2 hours 40 minutes the show is too long and could benefit from a spot of editing to prevent it from losing momentum. There are moments when the action drags and becomes a little predictable in terms of Kate and Marianne’s friendship woes. But there are brighter moments within the production; the reminder that for some people, television shows can be a life saver, that they provide welcome respite from the real world. There’s also the cast, who all excel in their roles. Simon Thorp gives a delightfully tongue-in-cheek performance as the fictional character Vykar, maintaining his cool façade as he delivers the lost, over-the-top script of Dark Sublime. Elsewhere Jacqueline King proves why she’s a much-loved actress as Marianne’s best friend, while it’s hard not to warm to Sophie Ward as ‘the other woman’.

But the night belongs to Sirtis and Mills, and the show’s best moments arise from their conversations, notably Marianne’s reactions to what her former co-stars are up to nowadays. Former Star Trek actress Marina Sirtis is perfectly cast as Marianne, no doubt bringing the experience of her encounters with fandom to the part. She’s delightfully sarcastic as the fading actress, and her more memorable lines are the alcohol-fuelled bitchy comments. Kwaku Mills impresses as the superfan who tries – and fails – to keep his cool when he meets his hero, and puts in the right amount of awkwardness and enthusiasm to make the encounter seem realistic; his facial expressions threatening to steal each scene he’s in.

Though it may be predictable in parts, what works with Dark Sublime is that it’s a fond tribute to sci-fi shows of yesteryear, and anyone who’s ever delved into fandoms is sure to relate in some way. With some standout performances and laughs aplenty, the play is an intriguing and entertaining premise of whether celebrities should meet their fans.