One love. One life. One truth. 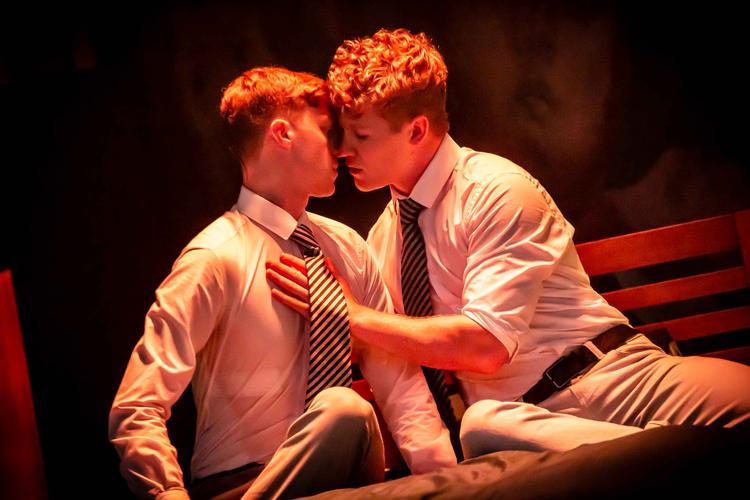 Peter (Daniel Mack Shand) and Jason (Darragh Cowley) – who attend a Catholic boarding school - have been in love with one another for a long time. But while Peter wants to come out to the world, Jason wants to keep their relationship in the closet. Jason is also a very popular guy at school, loved by guys and girls alike. That doesn’t go down well with Peter.

One of the girls, Ivy (Lizzie Emery), pursues him and this will have disastrous consequences for both. Meanwhile, Jason’s sharp-tongued sister Nadia (Georgie Lovatt) struggles for acceptance.

The musical, with book by music by Damond Intrabartolo and lyrics by Jon Hartmere, debuted in Los Angeles in October 2000. It had an off-Broadway production in April 2004.

Bare, directed by Julie Atherton, is packed with a lot of talent among a 15-members cast: Stacy Francis shines as Sister Chantelle, Jo is Claire  (Peter’s mother) who struggles to accept that her son is gay, Georgie Lovatt wins over the audience with her character (Nadia) and the beautiful song “A quiet night at home”, and Tom Hier is Matt, who is deeply in love with Ivy and craves attention and affection, without much luck.

The stage, designed by Libby Watson, has an atypical long and narrow design than makes easy for the audience to miss what is happening, depending on where are you seating or where are you looking at. The set is brought to life by the beautiful light design of Andrew Ellis, and the choreography by Stuart Rogers has a natural and spontaneous feel. Unfortunately, there were problems with the sound, and it was really difficult to hear and understand the dialogues and the lyrics of the songs.

While the first act is slow-paced, the story finds its way in the second act, until the moving finale, which sends a great message and raises awareness of suicides related to homosexuality.

It runs until 4 August