The Light in the Piazza - Review - Southbank Centre

A musical that takes us to Italy 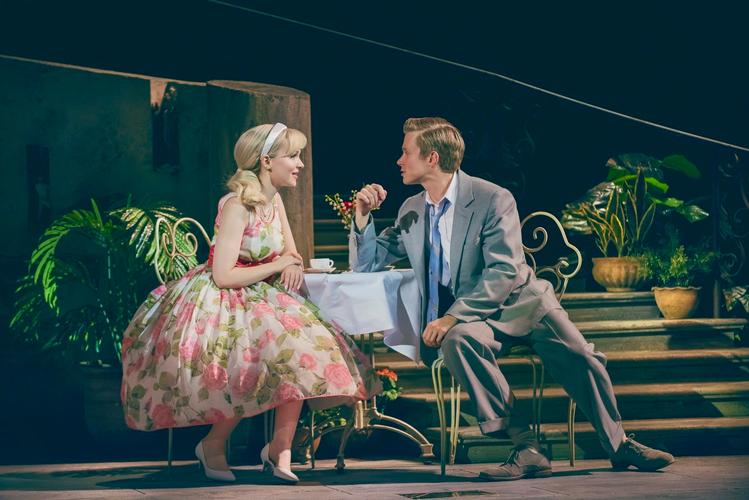 The story follows American tourists Clara (Dove Cameron) and her mother Margaret (Renée Fleming) during their time in Florence, Italy. Margaret has always tried her best to shelter her daughter from potential troubles, after an accident as a child left her with developmental problems. However, Fabrizio (Rob Houchen), a young Italian, catches Clara’s eye and their instant connection brings two families from opposite poles together.

The score, written by the Grandson of Richard Rodgers, Adam Guettel, is one of the most interesting pieces of writing to exist. When executed like this cast, it’s clear to see how it won the Tony award for Best Original Score several years ago. The sound itself has hints of Sondheim within its musicality. Its complex melodies and harmony, played beautifully by the 35 piece orchestra, carry the audience through the story of young love and whirlwind marriage.

The theatre itself is not a space which screams ‘intimate love story’, annoyingly. And the staging, which feels cramped, take you slightly out of sync with the setting of quaint 50’s Italy.

Above all else, watching such an established and talented stage of performers is always a privilege. Renée Fleming, who recently appeared in the Broadway revival of Carousel, has the voice of dreams and beautifully captures the torment and anxiety of a mother watching her daughter fall in love. Dove Cameron, with less operatic vocals than Fleming, becomes more innocent and Disney-esque than ever. Rob Houchen makes a fantastic Fabrizio, and Alex Jennings brings a comedic element to Signor Naccarelli which perhaps wasn’t captured as well previously.

Although a tale of a girl with an invisible illness would be tackled differently today, The Light in the Piazza is a beautiful piece of theatre and well worth catching during its short run.