Brexit returns to the King's Head 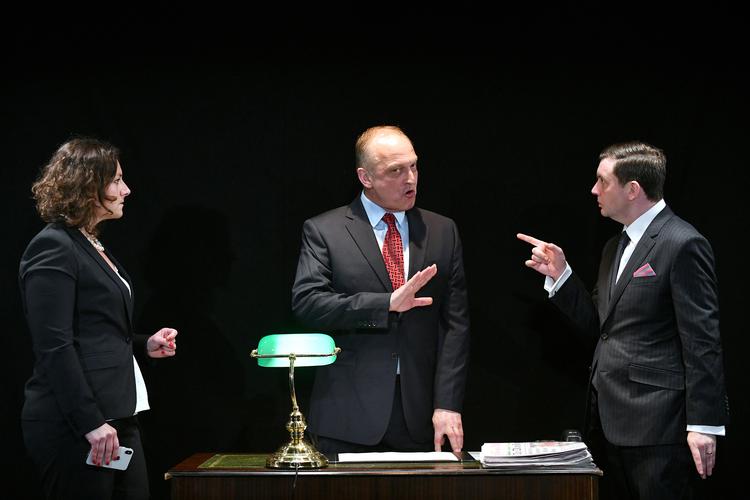 I bet when the timely play Brexit was first performed last year that the producers little thought that they would be able to revive it again quite so soon. After all, the UK should have shaken the dust of the EU from its shoes by now and Brexit should have started to become a distant memory. Ah well, our loss (if your politics tend that way) is very much the King’s Head’s gain as this splendidly sharp and biting satire finds a home in Islington once again.

We are slightly in the future and new PM Adam Masters is wrangling with his colleagues, his party, the country but not (it seems) his conscience in getting Brexit to happen…or not. Masters is caught in a position of “zugswang” a term from the game chess where it is a player’s turn to move but when any possible move will worsen their position. And so Masters’ masterplan is basically to sit on his hands and do nothing and just hope the whole thing goes away. Then he can cling onto power which, of course, is what really matters! His chief adviser and master of spin, Paul Connell thinks that his boss should take decisive action and so the stage is set for a juicy personal power struggle much in the vein of the classic Yes Minister.

The central role of the (apparently) vacillating PM is taken by David Benson who plays the ironically named Masters as a Cameron/May composite. By turns apparently incompetent and then devious, Benson captures the desperation of a politician who is thinking about his own self-preservation and his place in posterity – he is determined to outlast Andrew Bonar Law the shortest serving Prime Minister ever. After what I thought was a slightly hesitant start, Benson grew in strength and wrung every ounce of comedy out of the part. As advisor Connell, Adam Astill gave a controlled and very assured performance as the arch manipulator exuding a world weary demeanour as he pulled the strings of the political marionettes.

Diana Purdy and Simon Cavendish (Jessica Forteskew and Thom Tuck) made for a hilarious scheming double act of political rivals – even if they were meant to be part of the same party. She was all controlled vitriol and gritted teeth as she espoused the Remain cause; he was all oleagionously assured wit and camp remarks as the leader of the hard line Brexiters. Any similarity to real politicians was, I am sure, purely coincidental! Completing the line-up was Margaret Cabourn-Smith as EU chief negotiator Helena Brandt. Unlike all the other characters, Brandt seemed to know exactly what she wanted to achieve and how to achieve it and Cabourn-Smith was every inch the assured Euro politician.

The script by Robert Khan and Tom Salinsky (the latter also directed) was insightful but never dull. Peppered with acerbic one liners and situations which, though theoretically ridiculous, are probably (and slightly scarily) quite close to the truth, the play had real pace and energy – the 75 minutes fairly sped by. There were a couple of minor niggles – the lighting configuration occasionally left actors’ faces in shadow and would a nattily dressed politician like Cavendish really wear a suit where the trousers were too short? These however did not detract from the overall effectiveness of the piece.

Did I learn any more about Brexit? Not really, though I did come away feeling I understood a lot more about the so called movers and shakers trying to preserve their own skins in the corridor of power. However, I do take my hat off to the entire team for getting me to laugh heartily at a situation which has got beyond satire/parody and which has certainly gone beyond the proverbial joke.

Brexit plays at the King’s Head in Islington until 6th July. Who knows, the way things are going, it may be ripe for yet another revival in a further six month’s time.