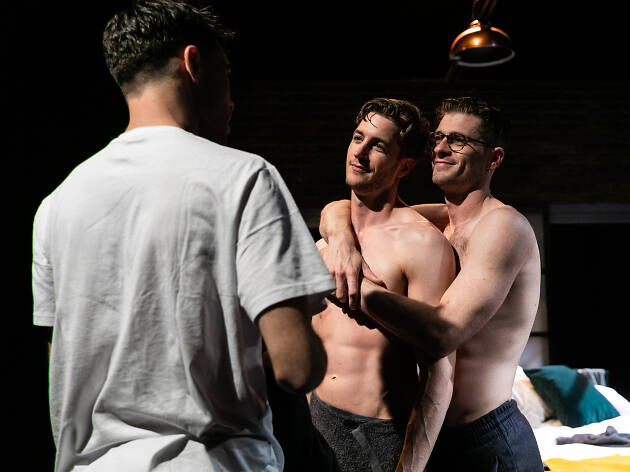 Be prepared: there is a lot of nudity in Afterglow: three attractive men on the stage, half-naked for most of the show. But this play is not just about beauty: it is about sex, relationships, love and intimacy through the depiction of a love triangle. It moves soon from the nudity of the opening scene to more challenging areas of human emotional relationships.

The play, written by S. Asher Gelman and directed by Tom O'Brien, honestly examines monogamy and non-monogamy, but without giving any answers, and I guess this will stir debate among audiences. But the truth is that, actually, there is no answer. The three men are naked in front of the audience, but their nudity is just a metaphor for the melancholic truth that they are telling us.  The questions are approached from different angles, from different perspectives: they will sound familiar to some or like a whole new world for others, but they are real – and not so often explored in theatre.

The story is fast paced and the 90 minutes go fast; the set design (by Libby Todd) is versatile with great use of the space and the cast is fantastic in portraying believable characters with real emotions. Sean Hart as the tormented Josh fully uses his facial and body language to show the conflict between his mind and his heart; the charming Danny Mahoney is excellent in the difficult role of Alex: he wants the best for Josh, but what is best for himself? In the final moments, he is able to release true, raw emotions that go straight to your heart. Finally, Jesse Fox is great in the role of the innocent, emotional and naive Darius.

Afterglow is a realistic, insightful, absorbing and entertaining show that brings to light the struggles of being in an open relationship. It is a powerful and challenging piece of theatre that explores both the physical as well as the emotional sides of a gay relationship.

It runs until 20 July