A celebration of the art form of musical theatre 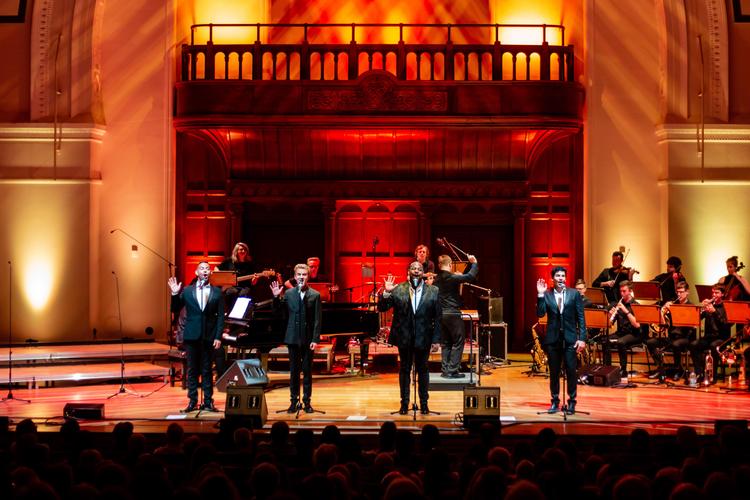 Main Men of Musicals saw the amazing singers and actors Luke Bayer, Ben Forster, Trevor Dion Nicholas and Liam Tamne taking the stage of Cadogan Hall to sing some of the most iconic songs of musical theatre repertoire from its early days to our times. “Luck be a lady tonight” was the opening theme of the overture played by the very talented band accompanying these artists, and considering how well things went, luck was a real lady tonight, together with an insane amount of talent. Lucy Drever, the main and only woman of the evening, was the presenter, a funny and very likeable one, who took us on a great musical journey from Golden Era classic songs like “Oh What a Beautiful Morning” to contemporary ones such as “Waving Through a Window” from Dear Evan Hansen. There were plenty of guests, including the wonderful choirs of Michael Xavier Masterclass and Goldmans Stage School (“Seize the day” from Newsies), the very talented Rhys Bailey, singing a very touching and impressive “Where is the love?” from “Oliver”, the Spirit Young Performers Company, busting some incredible vocals, and moves!, with a wonderful Jersey Boys Medley and finally Luke Redmore, proving to be more than ready to be a “main man” too after singing a perfect version of “Out There” from The Hunchback of Notre Dame.

But let’s talk about the stars of the night. All four singers proved worthy of the title of the show. Their musical and interpretative talents shone throughout the evening, growing in emotional and technical intensity and difficulty as the night went on. Ben Forster placed first when it comes to intensity, stealing a few standing ovations after masterfully performing some iconic songs from his repertoire, such as ’Music of the Night’ from Phantom of The Opera and Gethsemane from Jesus Christ Superstar. Watching him sing and perform there was a sense of complete involvement in the material, as if he was giving us his all, without sparing us anything, using his whole body, voice and spirit to transport us to these characters and situations. The audience felt it and reciprocated the intensity and passion he seemed to be sharing with us. Luke Bayer sang beautifully from start to end, and just as he was running the risk of coming across  as too well behaved, he brought us to the edge of our sits with ‘And you don’t even know it’ from Jamie. His energy and personality came through and suddenly he had us in the palm of his hand. Liam Tamne had a more tender and warmer quality to his singing and performance, and suddenly surprised us with a masterful, joyful version of “Sweet Transvestite” from Rocky Horror Picture Show. If this guy sounds good, he looks even better on heels. Trevor Dion Nicholas was pure class and enveloping us in a warm embrace of sound with his rich and impressively beautiful voice. His performance flawlessly ranged from the dramatic to the comedic, with a hilarious version of “If You Were Gay” from Avenue Q that saw him mingling in the stalls and singling out straight members of the audience (they were quite hard to find, well done Trevor for outing a few).

There was an atmosphere of playfulness and solidarity between the four main men throughout the concert, and seeing so many young guests perform (the youngest soloist, Rhys Bailey, being 15) really made the event a joyful and a truly uplifting one. It felt like a celebration of talent in all its forms and ages, and of the art form of musical theatre, so rich in all its musical and theatrical styles, and so powerful in bringing people together through the love of story and music.