A new incarnation of Shakespeare’s comedy 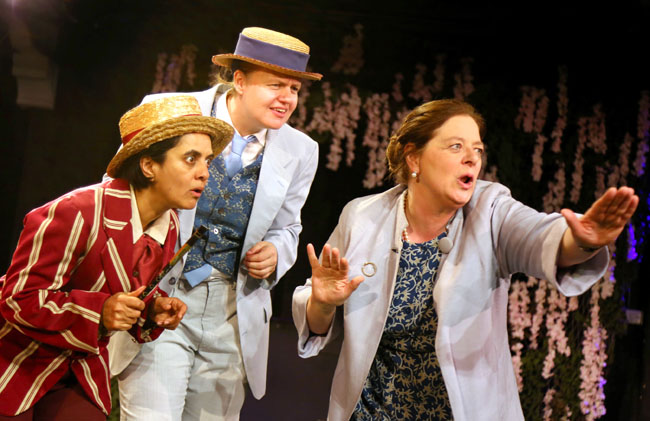 The latest in the Tower Theatre’s long tradition of touring Shakespeare productions to London and Paris for the summer, this time it falls to director Rob Ellis and his assistant Ciara Robley to deliver a new incarnation of Shakespeare’s comedy of righteous double-crossing and spirited, wifely rage.

With many of its central characters returning from Henry IV Part I and Henry IV Part 2, Wives’ comedy is oddly situated in Shakespeare’s body of work as a sort of side-story spin-off in which the grasping (in more ways than one, rather) buffoon Sir John Falstaff, enamoured with the sizeable dowries of the Windsor town wives, concocts a daft scheme to woo their assets out from under them. Naturally, the canny wives are having none of it, and so all the women of Windsor band together to show the dastardly old pervert what for.

The cast and crew make the best of what is often Shakespeare’s least well-regarded writing, wisely excising much of the dull, superfluous detail from the original script to make for a much pithier, faster-paced and more compelling production. Meanwhile, Max Batty and Lynda Twidale’s respective set and costume design transport proceedings to a lavishly-realised 1950s white picket fence incarnation of Windsor which is a gorgeously detailed pleasure to behold, and Colin Guthrie’s together with Ellis’ musical selections, full of contemporary rocking surf guitar numbers, lends everything a delightfully jaunty, carefree summertime atmosphere.

Playgoers in search of the thematic depth of Hamlet or vivid characterisations of The Scottish Play may be sorely disappointed by Wives, and perhaps find its comedic premise and characters far more simplistic and one-dimensional than the Bard’s more well-known fare, but Ellis’ cast does their level best with the material regardless. Amongst the highlights is John Chapman in a spirited starring role as a repulsive, lecherous – indeed, some may say grimly modern – Falstaff who is hugely entertaining to watch. Meanwhile, the Mistresses Ford and Page (Jill Davy and Helen McCormack) are both wonderfully energetic and compelling, with great camaraderie and chemistry between them, joined by Madeleine Gordon in an entertaining turn as the delightfully cunning Mistress Quickly. Sangita Modgil’s gender-bent Master Ford performs with great enthusiasm and vitality, carrying off her deliveries with a lively aplomb bordering on Time Lord, whilst James Van Langenberg makes for both an infectiously upbeat Nym and an endearingly sympathetic Master Fenton. There are surely some who will come for the Bard and stay for Daniel Watson’s gregarious, strongly-accented Sir Hugh Evans.

All the cast give earnest, committed performances, and all are ably assisted by Chris Mason and Anna Kovacs’ respective lighting and sound design, which creates compellingly atmospheric, absorbing, and evocative imagery to compliment what are at times vastly detailed, beautifully staged scenes of comic farce. That this is perhaps not Shakespeare’s best work is sometimes reflected in fluctuations in the energy of the production, but it remains a boldly upbeat, creative, and gorgeously put together evening of theatre, full of talent, and which never fails to entertain.