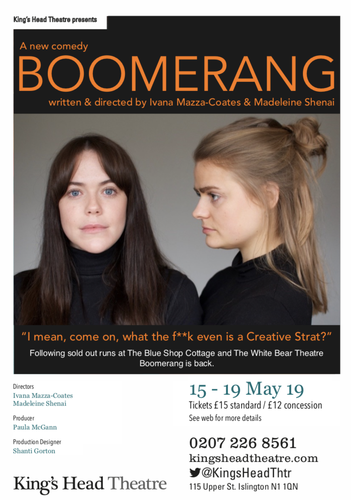 It’s tough being young these days, and the dynamic writing-directing duo of Ivana Mazza-Coates and Madeleine Shenai are determined to prove it with their new work, Boomerang. So-called for the generation of unfortunate twentysomethings forced to turn around in the mid-flight of their fledgling lives and careers and beeline right back into an indefinite stay under their parents’ roofs, the result is a passionately realised and engaging evening of dramedy theatre firmly set in a noble Bernard Shavian tradition of socially conscious, didactic art, and a Bertolt Brecht-like insistence on the theatre as a forum for radical political ideas and discussion.

We follow Mauve (Megan Purvis) in her efforts to organise a dinner party with her old friend Holly (Alice Kerrigan). In the twilight of her twenties and still living with her mum, she struggles through working life desperately unfulfilled and already dreading an insignificant existence and oncoming elderly death. Meanwhile, her mother Mel (Nicola Wright) is beset with worry that her seemingly rudderless, idling daughter hasn’t grown up properly and begs her to do something meaningful with her life – circumstances surely too familiar to any millennial trying desperately to scrape together a respectable life in the midst of the economic desolation and social privations of austerity. Meanwhile, Holly has left things unsaid for years which threaten to implode her and Mauve’s friendship, and all this is before Mel’s recovering alcoholic, would-be new-age hippie boyfriend Len (Daniel Higley) has turned up to join them, in the throes of a pathetic mid-life crisis.

The play ruminates on all of the contemporary bugbears of “the Boomerang Generation”, amongst them a soul-crushing urge towards social presenteeism, the nagging, torturous sense that we’re too old to be where we still find ourselves in life, and all manner of spiritual desolation and existential pains, explored and examined in Mazza-Coates’ and Shenai’s bold, inventive, and quirky writing which is full of warmth, pithy humour and off-beat spirit. The strength and depth of their writing is a highlight, skilfully concealing a tangible darkness beneath the moments of humour and levity, suggesting a uniquely modern, suburban strain of Samuel Beckettian melancholy in a domestic landscape of shattered hopes and dreams, and evoking the tense, foreboding style of a Harold Pinter play in which everyone is at each other’s mercy and all pretence is doomed to crumble to dust, with a final Jim Cartwright-esque lightness of tone and keen sense of gallows humour just about managing to take the edge off of the undercurrent of oppressive misery.

The writing on show is ably assisted with strong performances from the entire cast. Nicola Wright is pleasingly cringe-inducing as Mel, making crass, embarrassing sex jokes and gauchely exposing her daughter’s private neurosis in front of her friend, every inch the pitiable forty-something still desperately wishing she was her daughter’s age, but one with a heart who genuinely cares for her child’s future. Daniel Higley’s Len is an energetic, entertaining highlight, making for a grimly funny, sad spectacle of decrepit middle-age clinging to wasted youth by his fingertips, brimful of vacuous, Instagram-ready new-age claptrap and painfully inadequate, pseudo-philosophical easy answers to deep-seated modern problems of the self.

Megan Purvis’ Mauve, meanwhile, is the millennial struggle incarnate. She masks spiritual desolation, dissatisfaction with her life, chronic loneliness, and her contentions with the myriad moral and ethical crises of her time with endearing warmth, peppiness, and clumsiness from her first moments on stage, creating a compelling and relatable character, and also proves herself capable of great range, delivering tender, observant monologues with great skill in a strong performance. Alice Kerrigan as Holly, meanwhile, immediately makes a fond impression, contrasting a lively, bubbly and sweet outward demeanour with a mousy and anxious bent which betrays suppressed depth of feeling. She shows a similarly great range, going from upbeat mousiness to shocking, erratic derangement, giving her role emotional intensity and impressively carrying off beautiful monologues on love.

Beyond the writing and performances, production designer Shanti Gordon’s picturesque, richly detailed set is a pretty sight to behold even before the show has begun, casting events against the background of a baby-blue sky and lending proceedings the feeling of a series of grimly contrasting, artful portraits of modern life, with her jaunty, youthful choice of background music setting a light, breezy tone against which to messily juxtapose and emphasise the heights of intense, beautifully performed human drama the work ascends to by its end.

All told, with its history of being first performed as scratch, and now as a stage play, Boomerang retains a distinctly experimental, nascent feeling throughout of being perhaps slightly underwritten and not yet as fully-formed as it could be with more development time; but even in its current form it nevertheless remains a beautifully staged, powerfully performed, thought-provoking, and compelling human drama capable of reaching great dramatic heights.  Its run has ended, but in its wake it leaves behind an intriguing proof-of-concept and high hopes for what producer Paula McGann’s all-female company posse can achieve with their forthcoming television adaptation. I look forward to seeing it.