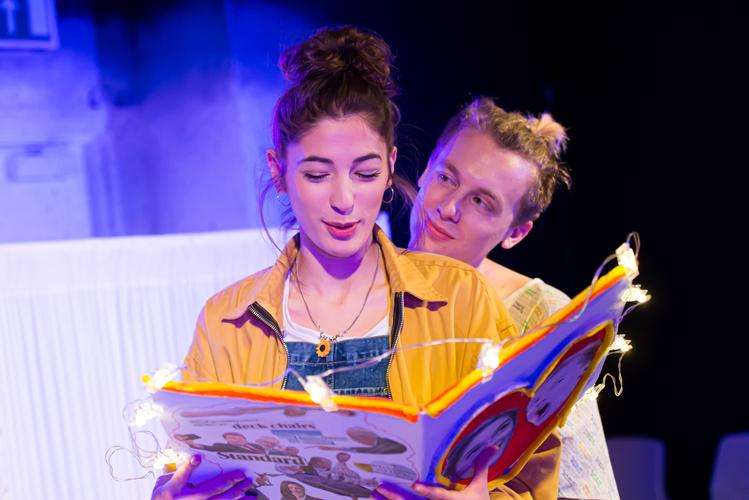 “I am a man. A failed man.” says Nicholas Shalebridge’s Max as Testament begins. He emerges a solitary, pitifully isolated figure out of total darkness into a small, intimate space transformed by superlative set design, lighting and sound into a rich, compelling, and deeply personal story of lost light, and the terrible human cost of the failure to allow it to shine.

Shalebridge’s Max, confined to a psychiatric ward under care after having tried to commit suicide following the terrible car accident which killed his beloved girlfriend Tess (Jessica Frances), and in paroxysms of repressed guilt and shame, descends into the depths of serious mental illness whilst his dedicated doctor (Shireenah Ingram) tries everything she can to help bring him back from the brink. As the traumatised Max begins to seek answers in conversations with Jesus (David Angland) and finds himself beset by harrowing visitations from Lucifer (Daniel Leadbitter), his only salvation from personal hell – and hope of living through traumatic brain injury -lies with his brother Chris (William Shackleton).

Edmunds’ wonderfully observant, witty, and incisive writing – itself a highlight of the performance - crackles with a macabre energy and pathos, filled with delightful wordplay and lyrical flourishes in the dour refrains of the oft-repeated great lies, now recast – more accurately - as the mad, angry delusions of a pitiable husk of brutalised humanity in crippling pain: “I am a man.” “I’m fine.”

The gorgeous penmanship is ably accompanied by William Harrison’s beautiful tapestry of sound, Alan Walden’s erratic, strobing lights driven to madness with straining to shine freely, and Becca White’s gracefully fluid, minimal set, able to transform on a coin-turn into a memorable, evocative procession of grim, darkly comical tableaus of pretentious, unhealthy masculinity, all by way of Edmund and his fellow guiding hand Harrison’s superb direction and staging.

Lead Nicholas Shalebridge is outstanding as Max, with a commanding and compelling stage presence underscored by moving sincerity, vulnerability, and emotional range, getting some wonderful, heart-breaking, sympathetic monologues and great moments of emotional turmoil which make for stirring and thought-provoking viewing. His stage brother William Shackleton meanwhile gives an affecting, contrastingly understated performance full of a drive towards fraternal love and care, tragically undercut by his own two-minded neuroses, and Shireenah Ingram lends a distinctive and valuable stage presence to The Doctor, cutting a sympathetic, distressed figure struggling with them both.

In amongst the many other highlights of a hugely talented and capable East 15 ensemble, David Angland is a revelation as Christ, filled with a boundless, infectious energy and zeal that proves an involving, contagious joy to watch whilst his evil counterpart, Daniel Leadbitter’s Lucifer, is a deliciously dark presence, playing the devil on Max’s shoulder against Christ’s angel, and driving the broken boy to paranoia, further madness, deeper depression, and desperate bargaining. Both give triumphant turns in their roles, and each lends themselves well to their smaller parts as suitably dreadful ‘lad’ stereotypes elsewhere.

Jessica Frances also capably performs an endearingly lively Tess, if one somewhat relegated to the margins as a haunting absent presence; more of a Lost Lenore in the abstract than any fully realised character, mostly existing, poignantly, only as the idea of a girlfriend, and as Max’s fading, idealised memories. From this, a strong and disconcerting performance emerges which encourages sober, instructive reflection, in its way, on the fact of there being no full recognition of femininity as shared humanity from any of the men, either in post-mortem imagination or in her real life, until it is far too late for almost all involved.

Testament is, all told, a beautifully written, staged, and performed work in every aspect, absolutely worth the price of admission and a night out. Edmunds’ powerful writing and his cast’s superlative performances in support of the fine male suicide-prevention work of CALM make for a marvellous, triumphant refutation of male flight from femininity and a passionate cri de Coeur for a broader definition of what it is to be a man of the modern world. It unflinchingly demands an acceptance of the vulnerability of men, an allowance for their failures, and licence to simply be people. In fewer words, perhaps Max, in the play’s first gripping moments, puts it best: