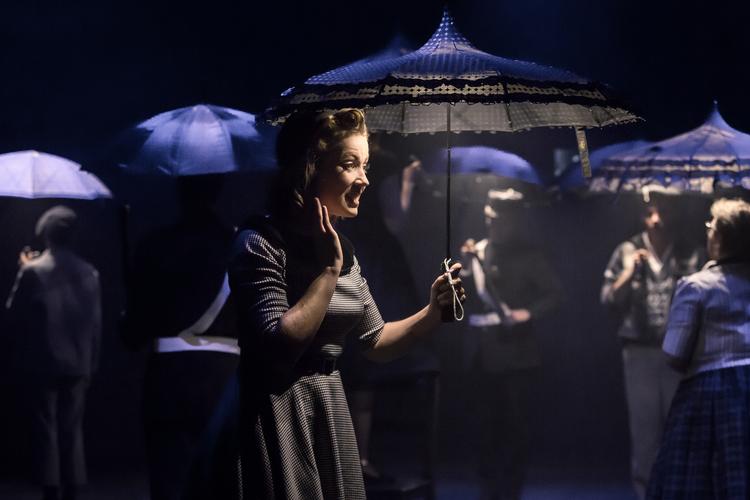 After having mixed receptions at various points since 1997, it was time for 'Amour' to make its West End debut, in the quaint little venue that is Charing Cross Theatre. Perfectly suiting this musical, the intimate setting brings to life post-war 1950s Paris, transporting the audience back in time and immersing them into the fantasy.

The fairytale revolves around the seemingly bland life of a civil servant named Dusoleil. He lives alone (beside the company of his beloved cat) and devotes his life to being a diligent worker, under the close eye of his tyrannical boss. After finishing work early, he daydreams of Isabelle, a stunning young lady who is unaware of Dusoleil, while being caught up in a toxic marriage with her controlling husband. One day, Dusoleil miraculously develops the ability to walk through walls- a skill that would go on to change his life forever.

Amid the innovative staging, witty rhymes and dashes of comedic remarks, the overall story could be argued to be somewhat cheesy, missing any chances of empathetic connections that the audience could have developed with the characters. As it is drawn from a short story, it is also slightly lacking a deep and lengthy narrative that is sort after, filling spaces that cause some to have an absence of interest. However, this is made up for with its lyrical concoctions, full of enchanting vocals and rich blends of harmonies. With the vast majority in song, the show keeps you entertained, but not gripped.

Props play a huge part in the creation of this musical. From lampposts to ladders; bikes, briefcases and bedsheets, there has clearly been a lot of thought into how the storytelling can be enhanced using such a minimal set. The choreography looks crisp, fitting neatly around these items- remaining fluid throughout, even with the use of half a dozen chairs or umbrellas.

Situated on one side of the balcony perches the band, who play a beautifully elegant score behind the goings on below. The opposite side is used upon several occasions too, which brings a new dynamic to the small theatre.

Overall, this musical is a great piece of light-hearted theatre, though not quite one of emotional depth and sincerity. Despite its downfalls in some areas, 'Amour' is full of warmth: the bittersweet tale is a delight.

It runs at Charing Cross Theatre until 20 July. For tickets, click here