The importance of words, language and communication. 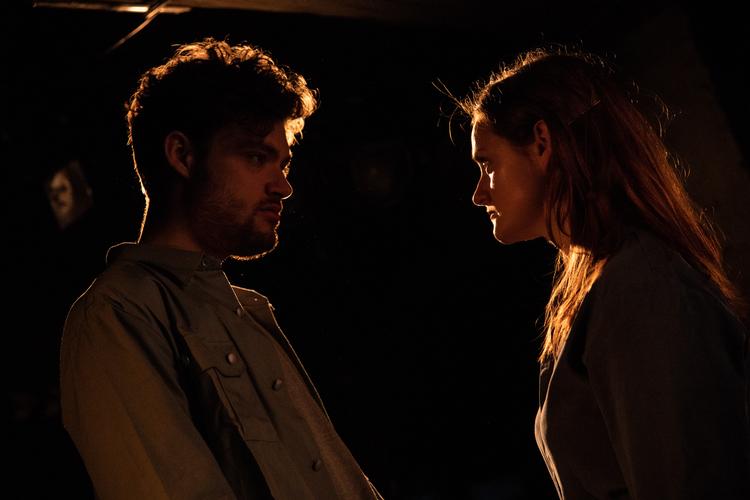 In a London in the not too far away future, the government has enforced a law restricting absolutely everyone to not speak more than 140 words a day. Bernadette and Oliver’s relationship is now tested on how many words they have saved for each other after work for dinner and bedtime conversations – while she initially believes that limitation is better than censorship and that it is democratic as it applies to the whole population, he angrily joins the marshes against a law reducing social mobility. Bernadette is a family lawyer and has on some evenings no words left for her partner while he utters noises on the streets to be heard but not wasteful and to prove a point.

Private discussions, confessions or private debates are soon no longer possible and this hurts both sides, especially if you saved your word allowance for a topic important to you but the other one cannot respond.

The Barons Court Theatre in its underground location is the perfect setting for this dystopian low-action nightmare. Actors Jemima Murphy and Charlie Suff are convincing, and we feel for them when they are heartbroken, especially after they realized they wasted all their verbal budget on singing along together to a pop song – they did not even make it to the end of it (and it was not even rap or hip hop). We see Bernadette and Oliver making up communication above speech, agreeing on abbreviations and merging words to code only they understand – blinking, knocking, etc. But they are both literate people with books, laptops and mobile phones so why do they not just write on a whiteboard or a piece of paper during their verbal curfew? This is a flaw in the story; the play does not give the government’s reasons for the law restricting everyone’s spoken words or how they count them or what happens if you do not follow the law and that is fine – but the most obvious way around the problem of non-verbal communication no one ever considers once. Strange days.

It runs until 26 May