Can the Urinetown prequel rise to the occasion? 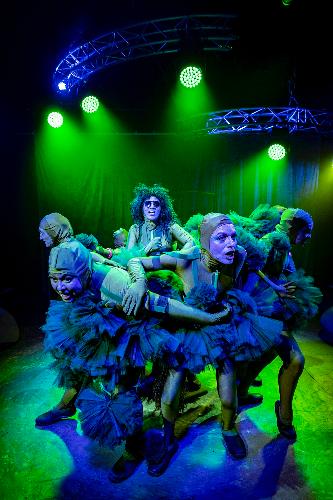 3,560,000,000 years ago floating around in the primordial soup are the salt-eating yeast,  all of them called Jan. But their world is at risk as their saline supplies dwindle and their king, Jan the Elder, is reluctant to tackle the issue. Yes, you read that correctly. This is a  musical about the very first yeast and it is every bit as bizarre as it sounds.

Yeast Nation is a curious production from the creators behind Urinetown that has not enjoyed as much success as its predecessor, and in truth, it is not difficult to see why. As this is a frankly absurd and wacky show, it requires careful attention in order to stick the landing, but in this latest production, the piece feels like a work in progress and overly superficial. I wanted to get on board with the outlandish style but consistently felt at odds with many of the creative choices - such as the decision to have all the yeast use northern accents. Frustratingly, this feels like a cheap, lazy and dated way to get laughs rather than utilising the comedy in the script. When the cast do lean into the comedy, there is very little variety in how the humour is directed and therefore, the gimmicks wear thin quickly.

Sadly this production even stumbles at the basics. For a start, please turn an actor’s microphone on before they begin to sing or speak. Beginnings of lines are lost to the audience and therefore plot and quips are missed. Surely this is something that should be solved in previews or ideally in tech? The sound mixing, on the whole, felt somewhat inconsistent as regularly the band’s volume muffled the voices of those on stage, meaning vocal performances were hampered and lyrics faded beneath the score.

The cast on the other hand cannot be faulted in their commitment to the show. Every ounce of movement and character is eked out of the text and as the finale arrives it is clear they have given it their all. Stephen Lewis-Johnston thrives as Jan the Second  Oldest, with a commanding voice and strong movement, particularly excellent when paired with Hannah Nuttall as Jan the Sweet, whose vocals soar with the music whilst bringing much-needed heart and charm to the production. Mari McGinlay is well cast as  Jan the Sly, delivering wit, strong vocals, and marvellous facial expressions throughout -  quite frankly I could listen to her and Marisa Harris (Jan the Famished) sing Little Sister on all day. Shane Convery pulls out all the stops as the highly-strung Jan the Wise as they scheme their way to the top. The cast are the best thing about this production, especially  when demonstrating top-class vocals that resonate in the Southwark Playhouse  auditorium (when they aren't competing with the band.)

Movement director Lucie Pankhurst has done some good work in creating a consistent movement style for the piece and there are a few nice sequences peppered throughout,  including when Jan the Second Oldest and Jan the Sweet rise to the surface. Diego  Pitarch has designed excellent costumes for the cast which not only look good but prove to be functional and intelligent in supporting the plot. The lighting design is well done and ensures that moments occurring outside the boundaries of the stage work nicely but again, some creative decisions, such as the use of glow sticks, feel half-baked.

Despite unwavering performances from a tremendous cast this production fails to uncover the topics of this musical effectively. There are so many themes buried in the script to dissect about survival, tradition and love but unlike the yeast, they never quite reach the surface.