Millennials - Review - The Other Palace

What does it mean to be a millennial? 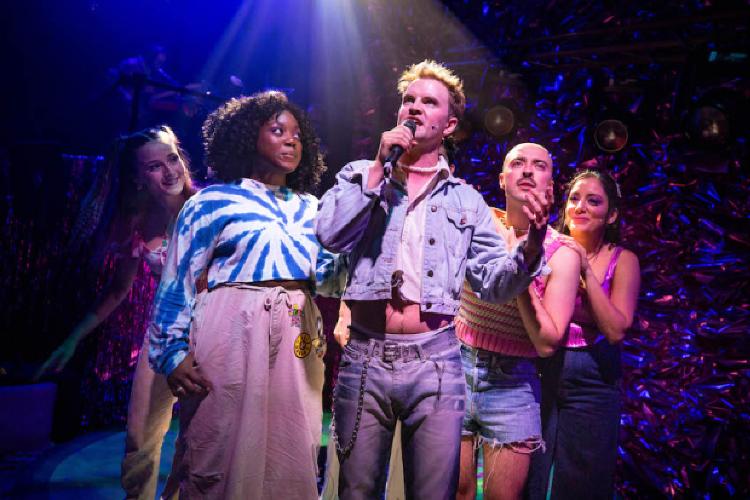 To say that the studio of The Other Palace has been transformed would be an understatement. Pearlescent pink cellophane ripples down the walls, slinkies dangle from the ceiling and the stage is an avocado with a trampoline in its centre, because of course it is. Instead of rows of seating, the audience are treated to bean bags, ball pits and even  a bumper car to sit back and witness this production from. On the surface, this might look a tad gimmicky and naff, but designer Andrew Exeter has crafted an intimate space full of character that amplifies this show beyond what it would have originally been capable of.  What may have been simply a song cycle concert becomes a semi-immersive experience where the effervescence of the cast is allowed to spill out beyond traditional boundaries.

Elliot Clay has composed a delightful collection of songs reminiscent, in style, of the music of the nineties and noughties that are brought to life by a stellar cast. Truthfully, it was impossible not to get swept along with the energy on show, particularly in the animated group numbers. Some songs are delicate and honest, whereas others are charming and witty, but all are packed with heart and a celebration of what it means to  grow up in a challenging world. Possibly due to the limitations of the song-cycle format, it is unable to leave a deeper emotional impact, but this does not diminish the evening’s entertainment. Tinovimbanashe Sibanda’s choreography and Hannah Benson’s direction utilise the space nicely and ensure that the intensity and spirit of the production rarely falter. The choreography, in particular, is slick, lively and effectively compliments the music throughout.

Each of the six cast are fabulous. Seeing them deliver knockout performances up close was an absolute privilege - not too much of a surprise when you have cast members from the likes of Heathers, Everybody’s Talking About Jamie, Cinderella and more. Thanks to the cosy setting, the deliveries were highly personable, with the cast able to make eye contact and interact with the audience at ease. Hannah Lowther shines as bright as ever  with her perfect rendition of ‘Masterpiece,’ as does Georgina Onuorah with her song  ‘Remember The Feeling.’ Bayer nails his vocals and like the rest of the cast, plates up a  masterclass of acting through song. Hiba Elchikhe and Luke Latchman stun with their  impressive performances and Rob Madge brings some comedic relief in their song ‘Four  Little Words.’ I never knew how much I needed to see Rob Madge leaping on a  trampoline whilst singing the words “don’t be a dick,” but now I believe it is something  everyone needs to witness. As already said, it was a genuine pleasure to see these performers in such an intimate setting, each of them a testament to the talent and variety the musical theatre scene has to offer. They are well worth the ticket price on their own.

Despite the rousing, infectious music and well-constructed lyrics, I am not overly convinced that Millennials adds anything new to the conversation surrounding generational struggles. It amusingly leans into many of the stereotypical millennial notions, but when stripped back the themes are universal. (Maybe that says more about  how we divide ourselves through categories of when we were born than it does this  show.) The desires to be liked, accepted and safe are surely felt by most but in this  instance, the desires are viewed through the lens of someone now in their twenties or thirties. However, this does not curtail the emotion and conviction all the performers brought to the stage.

Millennials is a rare and fantastic opportunity to see high-calibre performers up close as their careers continue on an upwards trajectory. Though the song cycle itself has room to grow, in its current state it is still nothing less than a brash and infectiously joyous party that will have you up and out of the ball pit dancing by the finale.

It runs until 7 August.