The system is very much broken. But who’s going to fix it? 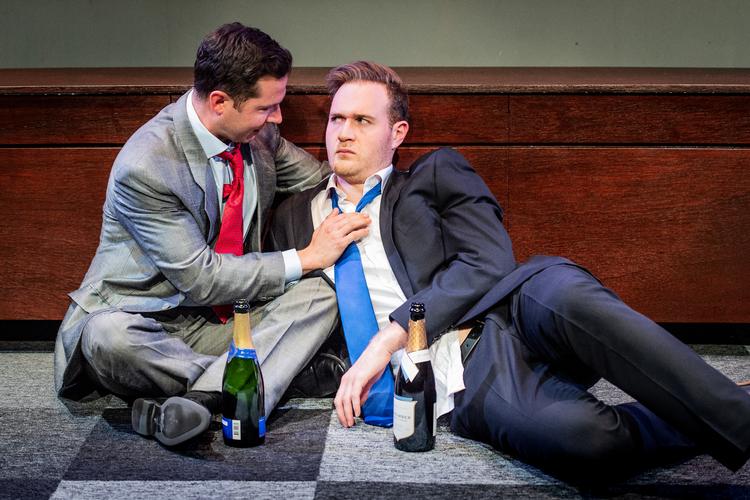 Very few won’t agree what a mess has become British politics in the last three years. From that fateful referendum until today, the panorama is pretty bleak. But the real beginning was the general elections that preceded the 23rd June 2016. It was at that time, with the campaigns running wild, that promises were made, and leaders started to take firm stances. Alderton’s new play, premiering now at Park Theatre, look at those days, at the aggressive atmosphere, at the dynamic of the conflict, and at the protagonists of the unfolding drama. Hell Yes I’m Tough Enough sells itself as a satire, an irreverent representation of the farcical pantomime the struggle for power looked like. Although starting really well, though, the comic element is gradually watered down, with the heated debates becoming just rude exchanges and sequences of labels.

Young Campaign Adviser Patrick (Mikhail Sen) lands the job of his dreams at Number 10, two months before the big GE day. Mentored and guided by Senior Campaign Manager, and the real head behind the Tory machine, Glyniss (Annie Tyson), he soon gets to know the big boss David Carter (Ben Alberton), the disregarded Vice Prime Minister Nick Clog (James Bryant) and the strategic Poppy (Venice Van Someren). Life in the trench reveals to be less romantic and more opportunistic than the young public servant could predict. On the other side of the frontline, a rather inept and unglamorous Labour leader Ned Contraband (Ben Hood) is further confused in the double coaching between the hippy Will (Michael Edwards) and the badass Sharon (Cassandra Hercules).

Through the eyes of Paddy, the story evolves. The differences between the parties become clear. The image of the leader is what at the end really fits the bill rather than the manifesto. Quick and critical thinking is key to reply to the continuous emergency situations in a political campaign.

The start, with the perfectly synchronised and logical-laughable chorus, is really a first-rate intro to the satire. However, it becomes soon obvious that a discouraged view is the bottom line. The ridiculing approach is too often lost in the ethical monologues and down-to-earth wake-up calls. For such a fast-paced script, the running time feels a bit too long. The energy on stage is palpable, and there is definitely good alchemy among the cast members. The comedy has really the potentials to humorously represent the absurdity of the drama in progress, but it struggles quite a lot to also leave with a strong moral message, which, from the background, evidently move too much the foreground.

Hell Yes I’m Tough Enough is at Park Theatre until the 18th May.