A musical that takes us back to the '80s 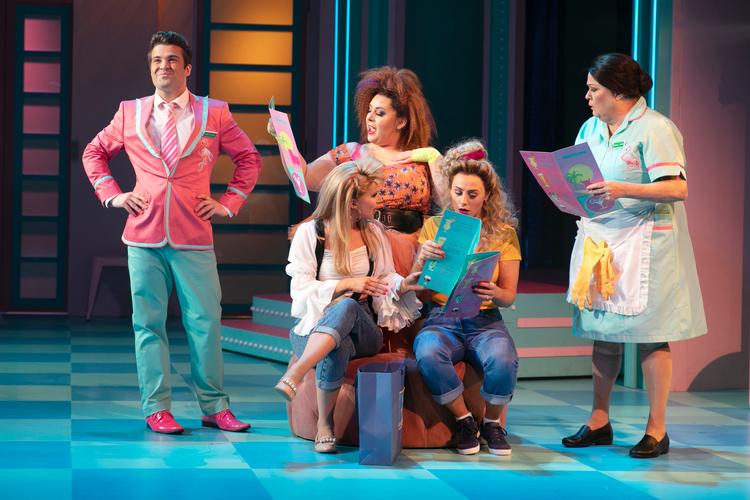 The runaway bride, Lorraine (Karina Hind) goes on holiday with her two gal pals, while the groom Olly (Cellen Chugg Jones) is persuaded by his best men to do the same. They both end up in Club Tropicana, in Spain.
There, Serena (Amelle Berrabah) and Robert (Neil McDermott) are getting ready for an inspection to get the title of “Hotel of the year”, trying to impress their guests and to make everything perfect. But drama is just around the corner.

Club Tropicana is a fun, silly and camp show. The audience is involved right from the beginning, with Joe McElderry who spreads some feel-good factor across the room, until the very end, when everyone is on their feet, singing and dancing.

This musical is a colourful, vivacious and easy-to-like show with some of the nation’s favourite ‘80s hits and wonderful dancing and singing. Very good performances by Emily Tierney, and the above-mentioned Karina, Cellen, Amelle, Joe and Neil, supported by the remainder of seventeen cast members with the five-piece band.
Kate Robbins in hilarious as the Spanish cleaning lady who outsmarts everyone, reminding me of Rosario, the moody maid in the series Will and Grace.
Evan if the storyline is slightly weak and predictable with a cheesy humour, Club Tropicana is a fast-paced, entertaining and energetic jukebox musical, perfect for a fun night out.

It runs until 27 April and continues to tour.