It's spring in Apsley.. 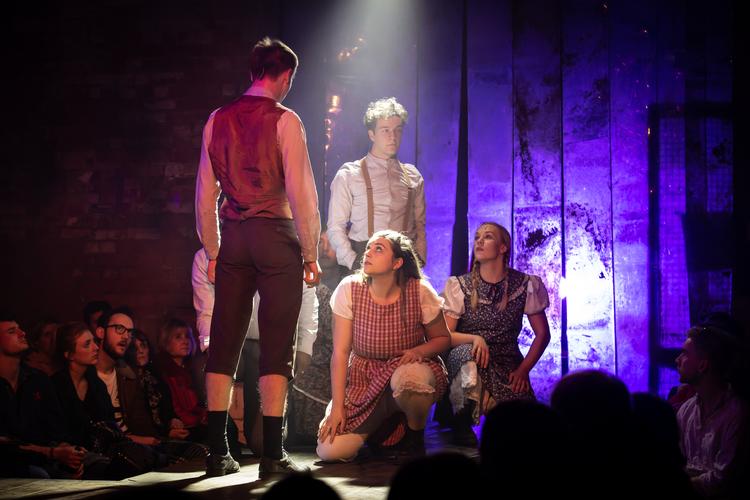 Spring Awakening is the hard hitting story of a group of adolescents learning about and accepting their newly maturing bodies and minds. The show visits their physical and mental turmoil and makes them questions their own views on sexuality, maturity and friendship.
It's described as an alternative rock score and is certainly a challenge. The script itself has barely changed since its original release by German playwright Frank Wedekind in 1891. This brings an intense contrast to the music and lyrics, conceived in the 90s by Duncan Sheik and Steven Sater respectively. As a play written in the late 19th century it is, although dark and thought provoking, extremely forward thinking, as some of these teens battle with same-sex relationship troubles, a concept which was unheard of within mainstream society at the time. All the topics that are addressed during the piece make the show personal for every member of the audience.
Vivo D'Arte always manage to use the space they have in imaginative ways. Previous performances have seen the audience follow the story between rooms of the Mill (Rent, 2018), or watch the show not only in front, but above you (West Side Story, 2017).

In this production, the stage is set out as a cross, and the audience is sat within the 4 corner spaces. It brings an immersive feel to the show, as the performers are at all angles around you. The staging itself perfectly suit this unique space, and the director, Georgee Burn, doesn't let any single audience member feel isolated despite this being a potential issue. You can, after watching the show, imagine the numerous difficulties that come with not only using a working Mill but using the staging in such an innovative way.

The choreography by Kieran McGinn has great potential but some sections have underwhelming execution and suffer due to the lack of space when the whole company perform together. The boys' ensemble tutting style sequence towards the beginning was interesting against the backdrop of a 19th-century German classroom. Despite this, the effort in such a short space of time must be commended - rehearsals started just 10 days ago.

The lighting design gives the audience distinct changes between 'real-life' scenes and the characters' fantasies. There is a group of colour changing lightbulbs above the centre of the stage, and intense spotlights that become unnaturalistic during songs (which resemble inner monologues rather than words to move the story forward). The blossom tree, made by Fiona Faber and Michael Gomm set on the far side of the stage is a beautiful addition to the minimal set.

The cast themselves, on the whole, are good. Opening night always comes with some minor problem to overcome but once the performers can become immersed in their characters it will take a major step up.
George Whitty who plays all male adults has such authority on stage. The audience has total faith in his abilities and his voice is second to none. Adam Johnson as Hanschen shows great confidence and stood out within the ensemble as a stunning actor, alongside Megan Ellis whose portrayal of Ilse was emotional and sincere.
Jake Halsey-Jones and Freya Humberstone as Melchior and Wendla make a beautiful couple and create a true love story throughout the show. They take to their roles with such maturity considering the hard-hitting nature of their story.

Overall, an extremely promising show and definitely worth a trip out to Hemel Hempstead to see.