This sumptuous shipboard farce is the perfect theatrical treat 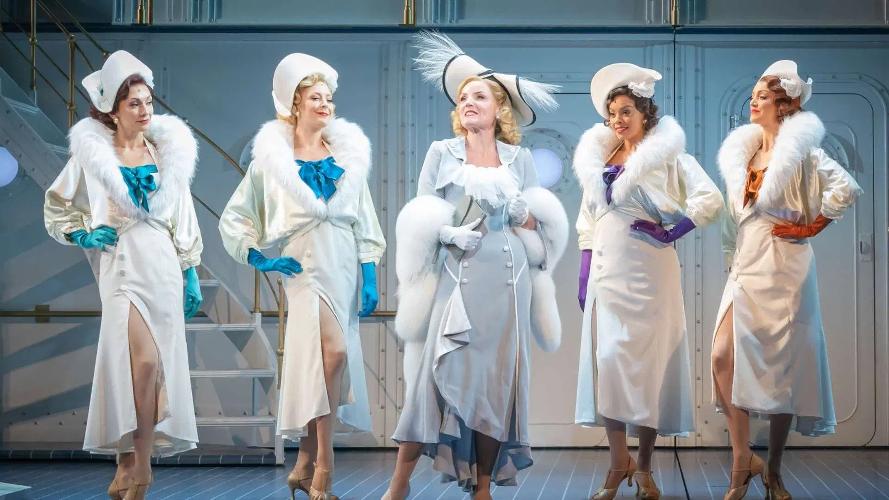 If you have ever wanted to fully immerse yourself in the wonderful and joyous world of Cole Porter’s 1930s America, then Anything Goes should be at the very top of your theatre wish list!

This impressively jubilant 2022 production is not the first time UK audiences have witnessed the trials and tribulations on board a luxury transatlantic cruise liner. The Barbican saw Anything Goes docking back in 2021 – an almost post-covid revival to musical theatre, a full immersive tribute to a by-gone era, and a show that brought back the importance of live audiences, re-emerging celebrations, and the joy and magic that musicals evoke.

Over 8 decades ago Cole Porter wrote the music and lyrics to Anything Goes and how apt that all these years later his music lives on and breathes life into a new generation of theatre enthusiasts.  It is aptly noted that in Porter’s music, even throughout the troubled Great Depression era to the present day Covid-induced whirlwind we have endured, we can still immerse ourselves in frivolity and appreciate the charm that his music and lyrics undoubtedly had when he first penned them.

If you are one of the many theatre aficionados and fanatics who have followed the history of Anything Goes throughout the ages, you will notice the evolution of this show and how the themes of love, mistaken identities, rejection, and celebrity chasing ring true in today’s world as much as they did back in the ’30s. Names like Ethel Merman, Patti LuPone, and Elaine Paige illustrate the scope of the talented leading ladies who have shepherded the show over the years. With an exemplary 2022 cast, there is no denying that this musical extravaganza is remarkably colossal in every sense of the word.

The 2021 production saw American musical stage star Sutton Foster grace The Barbican stage for sold-out performances and yes, her appearance drew in the crowds with a voice and personality to match however, a new lead, the magnificent and deliciously brilliant Kerry Ellis is everything and more with a full powerhouse performance. Her praiseworthy on-stage allure is something rather magical and it is somewhat difficult to take your attention away from her artistic brilliance. She is a triple threat, and the audience embraces this fully.

Ellis takes the reigns with her unique portrayal of Reno Sweeney, a nightclub singer/evangelist who is traveling on board the SS American from New York to London. Craziness ensues with a plethora of silliness together with a light-hearted bunch of characters, first and foremost Billy Crocker played by Samuel Edwards, with a silky-smooth voice and onstage presence to match. He is deeply in love with Hope Harcourt (Nicole-Lily Baisden) Who is already engaged to the ridiculously silly Lord Evelyn Oakleigh (Hayden Oakley). The illustrious Bonnie Langford is Hope’s mother, Evangeline, bringing to her character huge amounts of comedic timing and wit. Then there’s Moonface Martin (Denis Lawson) who is fleeing from the authorities and his sidekick Erma played by the hilarious Carly Mercedes Dyer. And not forgetting Olivier Award Winner Simon Callow, playing Elisha J. Whitney, whose onstage presence is a treat.

The story is so simple one doesn’t have to follow any of the madness on board as the jokes, love triangles, humour, and song after song of foot-tapping enthusiasm will have you fully immersed.

Director and choreographer, Kathleen Marshall has created a slick production with huge bounds of energy and reignited theatre lustre. The sets, lighting, and full staging must be applauded and recognized as a true feast for the eyes. The entire length of The Barbican stage is an effectively designed cruise liner and will most certainly transport you to another dimension filled with onboard antics, heady champagne evenings, nightclub romps, and toe-tapping sailors. There is a continuing pulsating beat throughout the production that leaves the audience either in stitches of laughter or brimming from ear to ear absorbing the enormity of the show. Each member of the cast needs huge amounts of recognition for their stamina and vocal talents not forgetting the larger-than-life dance numbers. The ravishing orchestra is pure musical indulgence playing fabulous Cole Porter tunes to the likes of You’re the Top, Blow Gabriel Blow, It’s De-Lovely and of course, Anything Goes!

If there was ever a time that we need to embody the ‘Anything Goes’ mentality, it’s now! And most importantly if there is one musical this year that should wholeheartedly be on your theatre radar – let Anything Goes be that special treat. This dazzling, rousing and truly high-spirited spectacle will set sail in just over a month and with tickets selling fast it will be criminal to miss it!

It runs unit the 3rd of September.