A comedy horror based on Romero's cult 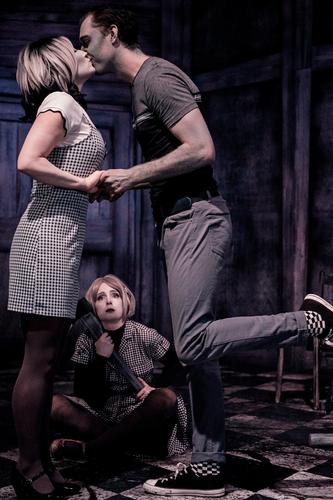 Night of the Living Dead is a horror classic (1968) and without a doubt Romero's best and most influential film.

Barbra and her brother drive to Pennsylvania to visit their father's grave. There, they are attacked by cannibalistic zombies. Narrowly escaping, but losing her emotional balance in the process, Barbra escapes to a house a bit further down the road where she meets Ben. They discover a family with a sick girl and a young couple in the basement of the house and they all get to work barricading themselves in and preparing weapons and other defences. The rest of the story concerns the group dynamics between these survivors, the story of what is going on in the rest of the USA - revealed through TV reportage and radio broadcasts.

The aesthetic of the show is black and white and the attention to the detail of the beautiful set, designed by Diego Pitarch is remarkable.
The lack of color in everything - from the set to the actors’ skin- it is not just visually effective, but also serves to bring you into the story.

While the first act tends initially to follow the story of the movie, the second act is a rapid series of “what if” scenarios. It has the feel of an improv session, the story getting increasingly silly, and the cast playing multiple roles.

There are twenty people (audience members) sitting on the stage in what is called “splatter zone”, and I was wondering the reason of this choice, as their presence can be a distracting factor and doesn’t help to keep focused on the messy, surreal story.

Horror-comedy means that scenes of humour are merged with scenes of horror and brutality. The idea might not be wrong: in fact, we release our tension by laughing. But we do the same, by screaming.
But here, unfortunately, the two genres are not well balanced because the show is neither scaring nor frightening: somehow the fear factor is neglected. Yes, the use of lights (by Nic Farman) and sound (by Samuel West) can provide some suspense, but it is not enough.

Also, all the different “What if?” scenarios of the second act, are repetitively tedious.

Night of the living Dead Live is a broad, silly, loud, well-acted and quite funny in places show who will be enjoyed by fans of comedies with a touch of horror.

It runs until 8 June