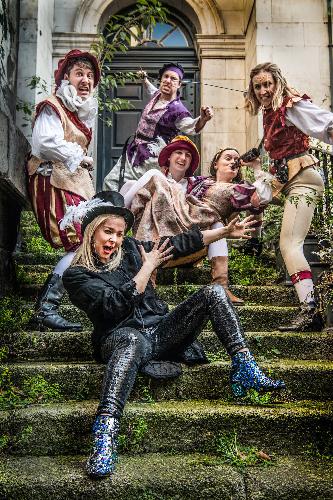 For over a decade a rotating ensemble of classically trained actors have been putting on  Shakespearean productions for audiences to enjoy across the UK and beyond. But there is one thing that sets them apart from the thousands of Shakespeare performances staged around the world - one of the five cast members has been drinking for the preceding four hours ensuring that hilarity ensues.

This company achieve everything they set out to do and have masterfully crafted this once wacky and risky concept into an art form. In this latest production of Romeo and  Juliet, our inebriated actor for the evening was the wonderful Jessica Brindle as Juliet.  She elegantly bumbled through the Bard’s work, slurred some soliloquies and during the  infamous balcony scene proudly declared, “I’m embellishing it, go with it!” Shakespeare would be so proud. Brindle made for an amusing drunk (not a normal sentence in theatre review), and clearly relished in the mischief she was allowed to create - though the final scene where Romeo finds Juliet apparently dead, hilariously did not quite go to plan thanks to Brindle’s stifled laughter. Friar Lawrence might need to up the potion’s strength next time!

The rest of the ensemble are also excellent, proving that it is not just the alcohol that  makes this a ludicrous piece of theatre. There are crude jokes and gestures galore with the actors all matching the energy of the drinker. All are fantastically quick-witted and react seamlessly when scene after scene is derailed. Our evening was cooly compèred by  Lucy Farrar, who somehow managed to keep the show on track whilst simultaneously keeping Brindle safe and nicely topped up throughout.

It is worth mentioning that the Sh!t-Faced team take the well-being of their cast seriously,  meaning that an actor is never asked to drink more than once a week and not more than four times a month. That supportive environment is visible from the stalls, as each actor is free to be silly and do stupid things without fear of embarrassment - though the alcohol likely helps.

It is no wonder that this company have become a staple of the Edinburgh Fringe Festival,  with their infectious energy and joy in creating silly theatre - it is impossible not to have a  good time. Grab some friends, colleagues or whoever is nearest and catch one of Sh!t Faced shows closest to you, it is a guaranteed laugh.

It runs until 10 September.