The ups and downs of a relationship that explores how we eat, where we eat and how much we eat, can define who we are 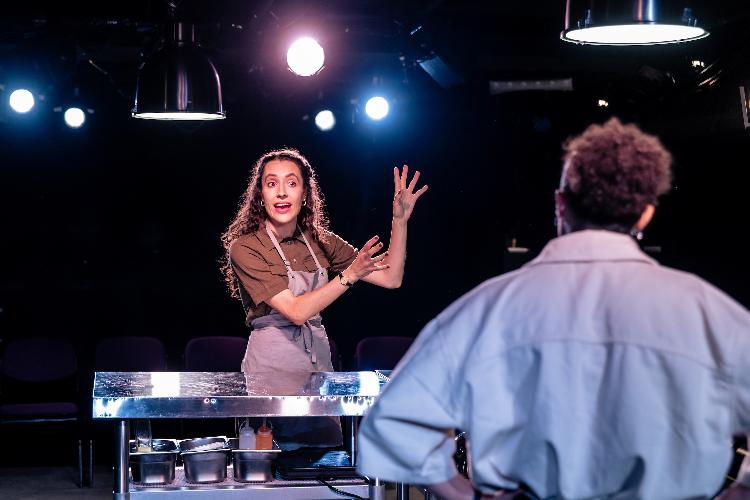 Sitting in the front row of the upstairs Soho Theatre felt very anxiety-inducing, worrying I was in the firing line for audience participation, or worse, a food fight. But I stay sitting. And I am glad I did, because all of those things were true, just not in the dreaded way  I anticipated.

Okay, there isn’t a food fight. But I’d be lying if I said I didn’t get a few cheese ball crumbs on my feet, but we are definitely participating as we’re thrust into the slices of the life of Bex and Lori, while we can actively see the reactions of all the other audience members in this riveting piece of theatre. If you’re hungry for a discussion about love, class,  family, sex and FOOD, this is the show for you.

We fleet between the past and present dynamics of Bex and Lori’s connection, from when they meet, how their romance blossoms, to the complexities and peculiarities of their relationship. Katie Posner’s transitions between past and present, scene after scene, are snappy and executed excellently, using the metal serving tables to mark out the stage space,  as well as for the set during scenes. Not only do we jump from present to past elegantly, but a range of themes and topics are covered with depth and justice. Lori (played by Eleanor  Sutton) seems to only be able to communicate with Bex (played by Melissa Lowe) through food. She flirts by taking her out to fancy dinners full of aphrodisiacs, cooking her unrecognisable dishes and preaching to her about what flavours are paired best. But Bex feels like food couldn’t make the both of them more distant, as she has grown up in a  working-class family and hasn’t been exposed to the high-end plates Lori discusses, causing tensions and resentment.

Between these moments of frustration, we laugh along with the characters in their exploration of love and food. Lowe is to be applauded for her committed and passionate performance, especially in a meaty monologue which is full of frustration, intelligence and politics, addressing their class divide and Lori’s imposing views. Lowe holds the stage with ease, engaging us more and more with each word.

Through the lens of cuisine, we see the ups and downs of a relationship that explores how we eat, where we eat it and how much we eat, and how it can define who we are. Both actors execute the beautiful and meaningful writing of Chris Bush and achieve the slick direction of Posney. Hungry makes us question the divides in society by asking the difficult questions we may never think about asking, about through the accessible topic of food, *chef’s kiss*.