The Marvelous Wonderettes - Review - Upstairs at the Gatehouse 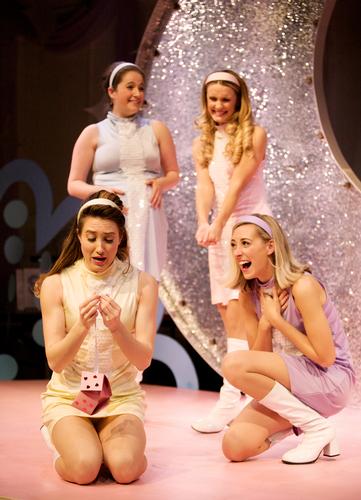 A long O and a quick M and G – The Marvelous Wonderettes is a show not to be missed – a brilliant, funny, sweet, coming of age musical from the USA packed with songs you’ll just want to sing along out loud to.

Think of Grease meets Legally Blonde – It’s 1958 and we’re watching a girl quartet performing on stage for their very own Springfield High School prom. They’re The Marvelous Wonderettes don’t you know and boy can they sing. They’re cute, they’re sassy and they strike their very own special pose - with melody of course - every time they say their band name.

There’s Missy (Sophie Camble), Cindy Lou (Rosie Needham), Betty Jean (Louise Young) and Suzy (Kara Taylor Alberts) – all best friends with hopes and dreams for the future and a story to tell – played out beautifully through songs and acting in between.

They even manage to hilariously weave in two unsuspecting members of the audience who remain seated but are called Johnny and Mr Lee – love interests of two of the characters.

The second act fast forwards 10 years to their school reunion and the girls are back on stage sharing their stories of ups and downs in life and love.

The songs are brilliantly chosen to nudge along the narrative. The set, at Upstairs at the Gatehouse in Highgate Village, is simple but perfect because this is all about belting out the numbers, one after the other – and all four succeed.

Most of the music is throwback bliss and includes hits like “Son of a Preacher Man”, “I Only Want to be with You”, “It’s in his Kiss (The Shoop Shoop Song)”, “You Don’t Own Me”, “Rescue Me” and “Respect”. The repertoire of more than 30 songs makes you want to run on stage and grab one of the microphones so you too can sing to your heart’s content – knowing you’ll never hit any of the high notes but not caring.

It’s also not surprising this fantastic show opened to outstanding critical acclaim during its run off Broadway in 2008. It’s uplifting, makes you forget the stresses of your day and leaves you feeling light and happy inside.

The Marvelous Wonderettes is on until 12 May.