A thriller based on real events 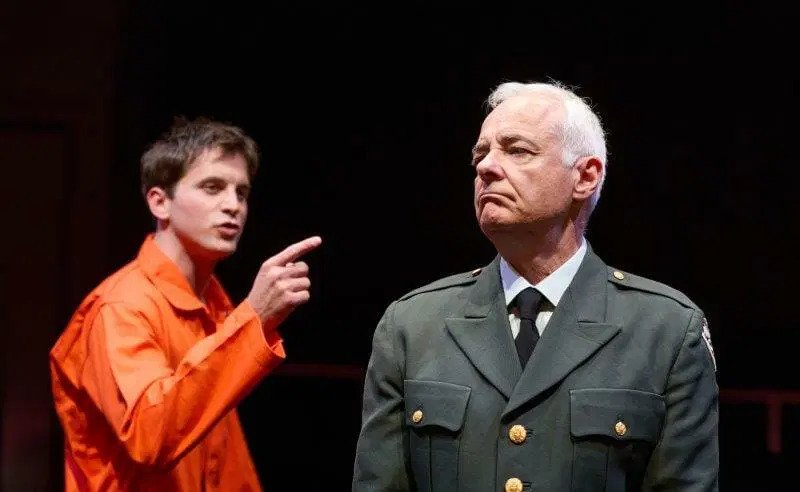 This well-performed production of a complicated play comments on the true story of the Mahmudiyah rape and killing of a 14-year-old Iraqi child and her family by United States Army soldiers in 2006. The title and scene structure of Bill Cain’s play is inspired by Dante’s Inferno and parallels the descent into the nine circles of hell.

Throughout the nine scenes, we journey through time and location. From a US Military Base in Iraq to a Holding Cell in the States, a Federal Prison in Oklahoma, back to Iraq, then to a US courtroom, prison, and eventually hell itself. Surprisingly, its form holds up in spite of a barren set and minimal props and costume changes.

The cast is comprised of four actors, three of whom form a company that juggles dual roles. The fourth actor, Joshua Collins, remains onstage the entire 90 minutes playing Daniel E. Reeves, the “scapegoat” soldier in the aforementioned hearing. Collins is impressive as Reeves, bringing incredible energy and volatility to the role. At certain points, however, nuance was sacrificed for volume and front-footed intensity that detracted from the character’s humanity. Some of Collins' strongest work was saved for the final moments of the piece where a beautiful simplicity was achieved.

Samara Neely Cohen was likewise impressive and moving as the prosector and David Calvitto, in both his parts, brought great clarity and balance to the piece. Often throughout but especially in the first part of this production, the volume of all the actors and Jack Arnold’s sound design was unnecessarily loud. Director Guy Masterson has carefully navigated this theatre in the round so there is not a bad seat in the house. Furthermore, this production’s 90 minutes are well-paced with rapid transitions.

At times, this play is slightly too on the nose for its own good and because it centres on Reeves, feels somehow imbalanced in its ethical appeals to an audience. That said, the play does ask important questions about the value of war in light of its consequences. It demands important reflections about the standards and screenings army officers receive (or do not) when they enlist. And particularly with this story, it explores the camaraderie of soldiers, many of whom enlist as lost boys, and are transformed and forever altered by their community in the service. The piece effectively flags the harm of unquestioned loyalty and groupthink. And at its most poignant, confronts the hubris of a soldier with the lie of a misguided war.

Runs through 23 July at Park Theatre after which it transfers to the Edinburgh Festival Fringe.