Parsifal reaches the journey's end at the Southbank from Opera North 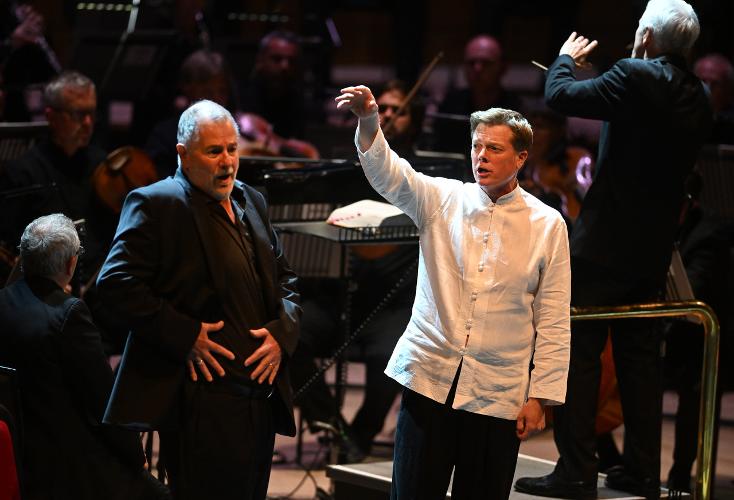 In his final, completed opera, Richard Wagner after a life of fury, ego and lust created one of the finest works to ever grace the stage. Parsifal, is based on Welsh legend and here is transported to Medieval Spain, knights guard the Holy Grail and continue their quest for the Holy Lance. Jesus’ shadow looms over the entire story, yet his name is never uttered.

Opera North’s final performance of their Parsifal at the Southbank Centre was both static and sensational. Over 4 hours of music, conductor Richard Farnes earned his stripes in his unrelenting offering, keen to raise up the score’s tense and touching moments. Much respect to lead violinist David Greed, who has played with Opera North for over 40 years, was to be his final flourish with them. The chorus dazzled as both knights, flower maidens (who attempt to woo Parsifal) and a celestial choir, wrapping up this monumental journey in the final few, exquisite minutes.

The show belongs to a golden Brindley Sherratt, as Gurnemanz, the backbone of the entire opera and in fine voice throughout. Debate may spark over Toby Spence as the title character, though I think he proves his talents even if this demanding role is a lot to ask. Undoubtedly the most fascinating character, the eternal Kundry from Katarina Karnéus made a great seductress and later, repentant of her past trespasses. The opera ties into a lot about pain, both physical and spiritual.

This is seen most vividly in Robert Hayward as Amfortas, wounded by the Holy Lance and only at the conclusion finds relief. He is usually great in anything he’s in and here is only seen in part, his voice well suited for these meaty, Wagnerian roles. Bad guy Klingsor, who was once a knight, get’s the Derek Welton treatment and appears to embody the strange character well. Intimidating vocals and a theatrical presence add to his second act appearance, taunting Kundry and flinging the lance at Parsifal, only for the boy-hero to catch and claim the sacred relic back to the knights. Stood with the chorus, Stephen Richardson gave off the image of Orson Wells, deeply voiced and as the dying father of Amfortas, Titurel.

There are many highlights of the opera: the Prelude, The Transformation Music and the Good Friday Music all standout. The bolstering orchestra swept things along, even in more still places. The brass played a big part, two harps for the finale and the famous bells all added to the pot, even the wind machine and thunder sheet for the vanishing of Klingsor’s castle were a fleeting few bars of joy.
Nothing really rivals Parsifal.