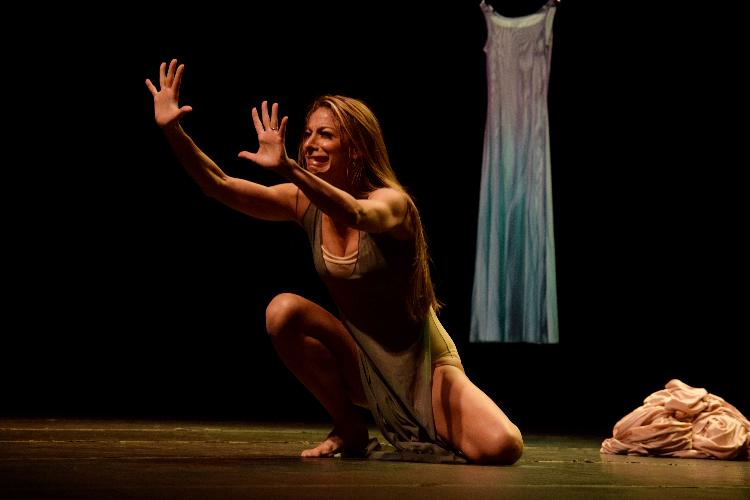 A dance piece devoid of language that journeys through the transitions and threshold moments of one woman’s life. Save for the four in-use clothes hangers suspended in the air, this sixty-minute piece is set on a barren stage. Maria Caruso, the evening’s performer, choreographer, and costume designer is exceptionally gifted and overflows with emotion and energy.

The piece begins and ends with a white fabric that Maria adroitly manipulates to be in one instance a dress with a long train and another, a cradled infant in the arms of a mother. In between she takes the audience on a journey through time as she encounters, resists, welcomes, and succumbs to each new costume, thereby representing a new reality.

It cannot be understated, in a speechless work, the importance of sound. The music by Nils Frahm, Kevin Keller, and Garth Stevenson was superb and often as compelling as the work on stage by Ms. Caruso. Ebbing and flowing, full of booming crescendos and whispered diminuendos, this element felt like a second character in the show. Layering on tone, context, shifting rhythm, and so forth. There were instances when (whether intentional or not) the dance felt in opposition to the music. Nevertheless, the piece would have suffered greatly without it.

Maria is a prolific dancer and while her self-expression was raw and her soul was laid bare for all to witness, at times I felt the repetitions were unjustified and the story unclear. Granted, interpretive dance is a medium that is new to me. But at just an hour, this piece is worth catching for open-minded audiences desiring to layer on meaning to a work that feels malleable, truthful, and displays an extraordinary physical feat.

The touring show has one more performance at 8 pm on 4 July at the Lyric theatre.