Trial by the court of public opinion 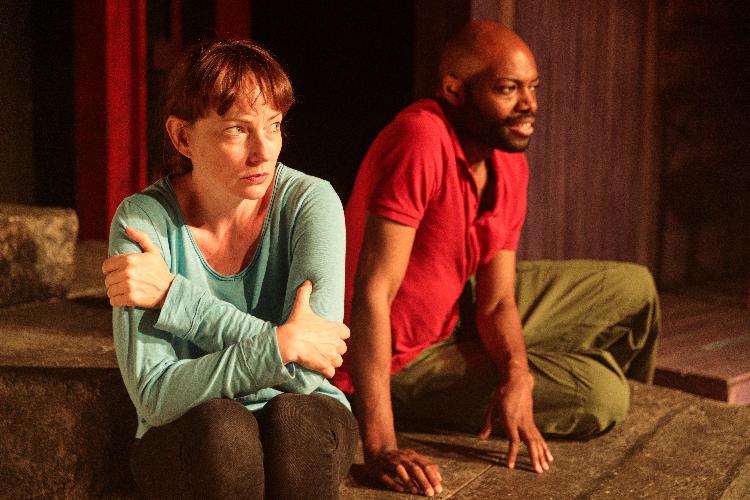 Public opinion and social media can be dangerous tools in the justice system. We saw this most recently in the civil case between Johnny Depp and Amber Heard - whatever you may feel about the jury’s verdict, it very much felt like Heard was guilty as charged before the testimonies began and the backlash against her was seismic. This is what is on

show in Tom Ratcliffe’s new play. Fact, fiction and plot become twisted, leaving a  confused mess in its wake and sadly this production is unable to untangle itself from it.

Based on real-life events, Evelyn, is set in the seaside town of Walton, where Jeanne has advertised her spare room on Gumtree despite being against the rules of her retirement village. Sandra, complete with a murky past, arrives and swiftly settles in and begins to rebuild a life for herself. Questions are soon asked about her identity and whether she is the infamous Evelyn who, according to people, assisted in the murder and subsequent coverup of a child. The plot rapidly becomes chaotic as the characters seemingly lack motivation or purpose for their actions and are riddled with inconstancies causing the emotions and choices in scenes to become rather jarring. The disappointing lack of chemistry on stage only adds to this, reducing the believability even further.

The scenes are bookended with the cast dressed as seaside staples, Punch and Judy,  accompanied by the crocodile. They prance about interacting with the audience, reacting to posts in the local Facebook group and portraying the attitude of the Walton public.  Their masks and physicality ensure that these moments are creepy and uncomfortable but partially due to the cast size, they rarely feel mob-like or effectively convey the anger and fear of the residents and if anything, implies that they are stupid and silly.

There are some strong individual performances from the company, notably from Nicola  Harrison, who does her best as Sandra whilst battling the odd directional choices.  Equally, Yvette Boakye as Laura the only character that drives the play forwards. Boakye does well in the heightened moments on either side of the interval, but sadly the script undermines this work as any moment of tension is rapidly undone.

Michael Crean creates an enchanting live underscore for the play, accompanied by some twisted classic seaside tunes and there is some quality set design from TK Hay, who has constructed a realistic, weathered-looking slipway and beachside railings. It is unfortunately underused by the direction and remains a backdrop for the majority of the play. The lighting design was a tad clunky throughout, with lighting changing unnecessarily and indiscreetly mid-scene - quite distracting. Madelaine Moor’s direction does little to keep the play flowing and scenes become static and struggle to get moving again.

I do believe that the concepts at play here are good and an examination into the court of public opinion is a fascinating one. Still, Ratcliffe’s script appears to be half-baked with most scenes doing little to progress the plot and the majority of character growth happening offstage - Kevin and Jeanne particularly risk becoming two-dimensional as a  result. There is never a moment in the two-hour play where we feel the full force or power of mob justice and therefore the play is doomed to feel underwhelming. There is some quality material buried somewhere in the sand here and hopefully, with time and some more development it can be found.