A thoughtful cross-examination of becoming a parent 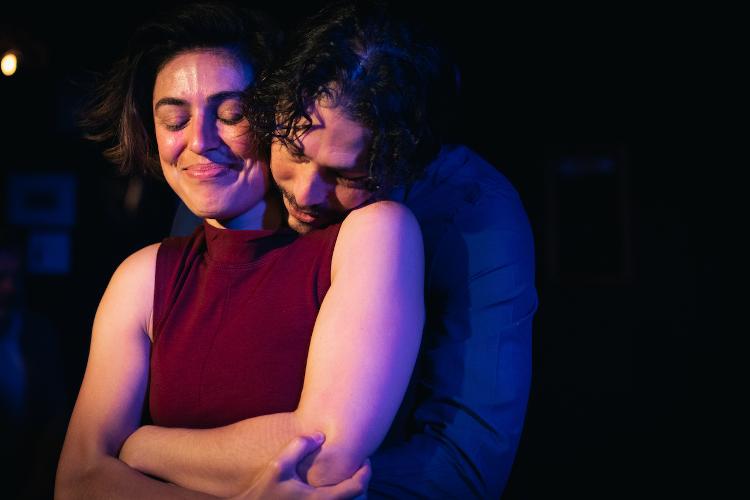 Natalie Ekberg’s new play Diversifications challenges the various hurdles that women face when it comes to pregnancy. The non-linear conversation begins by bringing together three husbands/partners in a pub, Juan, Alan and Patrick, each longing for answers. Whilst their three partners, in a testing clinic, find mutual understanding through their own lack of an answer.

Pamela, Samantha and Corinna arrive at the clinic in response to a suspicious letter following a previous ‘all clear’ correspondence. They are swiftly informed that the doctor has been stuck in an accident en-route and will be delayed by an hour. Despite the initial frustration, each is relieved for varying reasons and relishes in the chance to relate to one another as they share their experiences of relationships, aspirations and hopelessness.

Constance Villemot’s set design immediately transports us from the bustle of Islington into a local pub with an accurate attention to detail from the stained posters on the wall to the chalkboard sport updates on the back of the toilet door. The stage is split between the pub and the clinic with a raised rostra providing the adjacent clinic with simplicity. The Old Red Lion is a tiny and intimate space and director Jess Barton manipulates the space with elegance. With additional expertise from lighting designer Beth Bains, Barton uses the diagonals and levels within the small playing space to clearly transport us into the heart of each relationship’s peaks and troughs.

The strong cast of six bring this tiny space very much alive. Warming us in gently, Nick Morrison-Baker’s Alan gives a calm repose as they introduce the reason for their gathering. Morrison-Baker’s vocal energy fills the space with a charm and presence that draws us into the heart of the action. Likewise, Jermaine Dominique’s Patrick has an endearing physicality and very visceral connection to the text. This bubbly attack is matched by their counterpart in Kaara Benstead’s Corinna, a mother of four, slipping the odd glass of wine to survive to the end of each day. Benstead’s front-footed sharpness creates a spark between themselves and Dominique.

In contrast, Alan’s counterpart Samantha, played by Janine Wood, creates a mature balance with the ferocious Corinna. Wood brings a calmer resolve yet the tension between Alan doesn’t dissipate. The relationship between this slightly older couple is by far less dramatic but there is definitely a place for the voice of age within bearing a child, which is just as heartbreaking as the likes of Pamela.

Pamela, played by Saria Steyl, faces perhaps the most common struggle with having a child, but with a twist. After attempting IVF three times, Pamela gets lucky… however, the freelance career she has leaves scars in the multiple abortions she has had to keep her own career on track. Steyl holds her nerve with the emotional content on her shoulders. Steyl’s voice comes across as somewhat swallowed in a perfectly minute performance with a solemn resolve. Their counterpart Juan, played by Alvaro Flores gives the relationship a sensitive and cheeky edge igniting the young couple’s passion and gives rise to the challenge many young couples face; joint commitment to having a child.

Ekberg’s new piece is certainly a sombre capsule of morbidity. Don’t expect a laugh every minute, the whole 70 minutes seem to simmer into a serious examination which certainly brings forth some challenging food for thought.

It runs until 2 July.