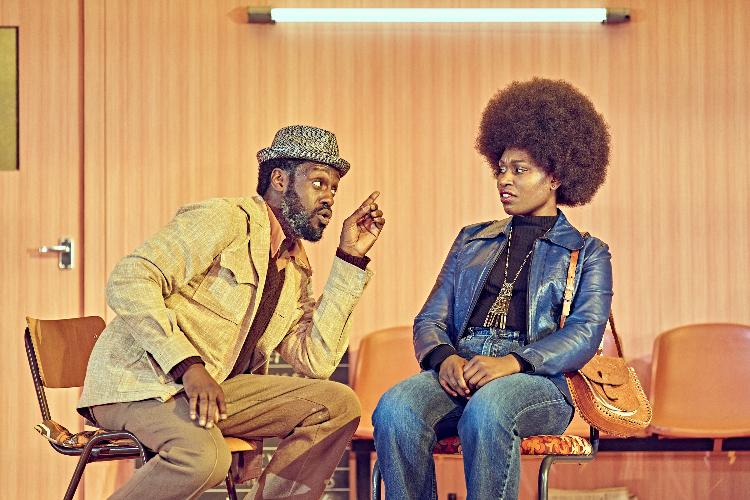 The first play in August Wilson’s American Century Cycle, Jitney, centers on a 1970s community of Black jitney (cab) drivers as their business faces both internal strife and the threat of gentrification. Exploring the plight of hard-working men and the emotional journeys to dreams realized and shattered, this piece carefully questions the allegiance of its audience and subtly displays a post-1960s America, still rife with racism and inequities.

It must be said that Casting Director Jacob Sparrow and Director Tinuke Craig have assembled an exquisite company of actors. Each in their own right, including understudy Blair Gyabaah who is making his professional debut as Booster, fights like hell for their character's beliefs and needs. It is rare when covering a show that a reviewer forgets they are watching performances and can simply immerse themselves in the story. This happened often throughout the evening’s performance and is a great credit to a ruthless, present, spontaneous, and utterly believable ensemble of talents.

In particular, Wil Johnson’s stoic turn as Becker possesses a quiet power and resilience that captivatingly disturbs the air onstage. Sule Rimi as Turnbo hilariously lightens the evening but surprises with an unhinged quality of danger. Together with Solomon Israel’s charming but touchy Youngblood, the pair at odds create a pressure cooker of tension throughout. Leanne Henlon’s eye rolls and “mmhm’s” spoke volumes about Rena’s history of unwelcome flirtations from men. She shines further in a phenomenal scene with Israel in which the audience will be hard-pressed to pick sides. Geoff Aymer’s displays great dignity and presence as Doub, Nnabiko Ejimofor’s overflows with charisma as Shealy, and Tony Marshall playing Fielding has a field day with the alcoholism and forgetfulness more than proving his comedic chops as an actor. Dayo Koleosho as Philmore delights throughout and tugs on the heartstrings in the final moments of the production.

Tinuke Craig’s pacing is extraordinary. The protruding set, peach-toned, and effective features a door that endlessly revolves with character entrances and exits. As it opens and closes, the audience witnesses a marked shift driving ahead with great momentum. In addition to the set, the world is further realized with a costume design fitting the distinct personalities and ages of each individual character. Alex Lowde’s specificity creates a time and place which feels lived in and truthful rather than a commentary. Sarita Piotrowski’s movement work between scenes is a powerful tension-building dance with Elliot Griggs on lighting and Max Perryment on Sound & Composing. Ravi Deepres’ projections help further to shape the world of the play.

This combustible and utterly gripping rendering of a less-produced August Wilson classic will be remembered and treasured for years to come.