The dark side of the meat industry 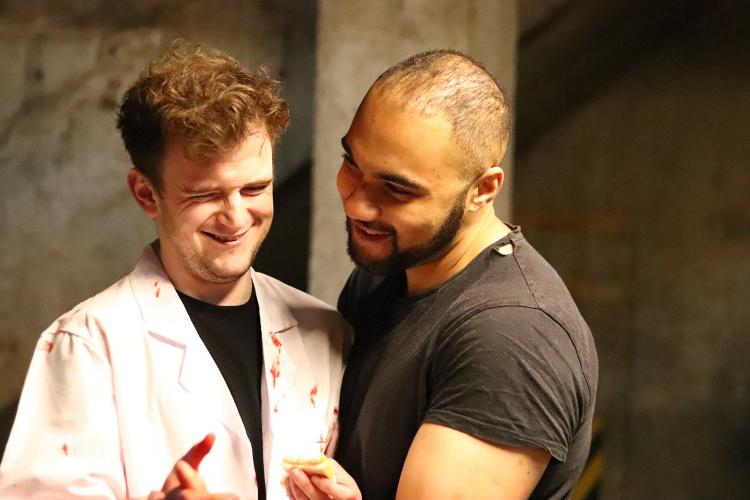 Sinister, moving and electric, Blood On Your Hands explores the dark side of the meat industry and the effects it has on the workers involved.

The play begins by following the story of Kazimir (Leyon Stolz Hunter), an immigrant from Ukraine who left his wife and children in Poland to seek a better life for them in the UK. Kazimir is a trained veterinarian, who ironically finds that the only work he can get is in an abattoir killing animals. Kaz soon strikes up a friendship with Dan (Phillip Jones), a 25-year-old staple worker at the slaughterhouse. Hunter and Jones have an electrifying chemistry that brings their characters and friendship to life.

Throughout the play, we meet people that flesh out the two characters’ lives and past. We meet Dan’s girlfriend, Eden (Megan Louise Wilson) who soon becomes a vegan activist after understanding what happens at Dan’s workplace. We glimpse into Kazimir’s home life with flashbacks and phone calls to his wife, Nina (Anastasia Aush). We meet the cold HR manager of the abattoir (Fred Rawicz) who seamlessly portrays the ruthlessness of the industry.

Directed by Anastasia Bunce and written by Grace Howarth, the two creatives undeniably complement each other. Bunce flawlessly brings the text to life using creative staging techniques and some physical movements sequences that captures the essence of the play.

‘Blood on your hands’ is, overall, an incredibly moving and disturbing piece. Its bravery in highlighting the lesser-known story of the exploited abattoir workers is commendable and brings to light the fact that a controversial topic such as veganism, has no need to be controversial at all. Not only does this play display the horrors that animals unjustly endure for the sake of food, it shows that the human workers in the meat industry are being unfairly treated, exploited and abused. This play is enough to sway anyone toward a plant-based lifestyle (and hopefully the cast too!).

‘Blood On Your Hands’ was performed at The Cockpit Theatre on the 9th and 10th of June.