A musical tragedy of the pop Prime Minister 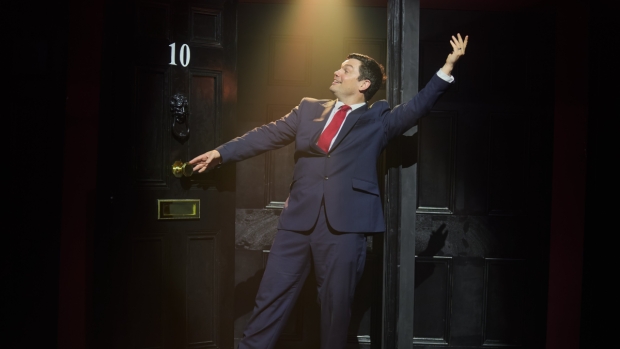 Amongst the political turmoil of the past week, you might think that the last thing anyone would want is to engage with even more politics, but Harry Hill and Steve Brown have crafted a  production that is a little more entertaining and gratifying than the usual dealings of Westminster,  but that isn't saying much. Charting the rise and eventual fall of Tony Blair, this is not your usual foray into the messy world of British politics. By treading less carefully between fact and fiction,  humour and silliness are allowed to flourish, but truth be told, this musical brings little new to the dispatch box.

The show begins with Tony on his deathbed, desperate to confess his sins and to understand where it all went wrong. We are led through key moments of his life, from his early days at Oxford right through to the Iraq war - yes, this is a musical that involves the Iraq war and before you ask yes, both Saddam Hussein and Osama bin Laden have their own songs. Charlie Baker leads the cast with a solid impersonation of the ex-Prime Minister, whose hapless likability and wide smile guide him right to No. 10. Baker is well cast and utilises his stand-up comedy skillset alongside his quality vocals to inject life and dynamism into the politician, creating a bumbling and charming performance. Opposite him as Cherie Blair is Holly Sumpton, who delivers a fine performance  with quality vocals, complete with Liverpudlian accent. Her highlight is the hilarious tango number when Cherie and Tony first meet.

As the musical progresses, we meet a myriad of household names including jealous number two  Gordon Brown (Gary Trainor), complete with all his breathy mannerisms, the slow and persuasive  President George Bush (Martin Johnston) and the aggressively northern John Prescott (Rosie  Strobel) plus many other memorable faces from the Labour party. Madison Swan makes for a  wonderful Princess Diana and draws many a laugh through her shy, wide-eyed glances towards the audience and Howard Samuels has a lot of fun breaking the fourth wall as Peter Mandelson.  The cast do well in handling a multitude of characters, helped massively by the sheer number of wigs and elasticated beards.

Though this is intended as an overly light-hearted romp through the Labour years, problems arise quite quickly. Peter Rowe's direction seems to have forgotten that the Park stage is in thrust  (where the audience sit on three sides of the stage) and therefore almost the entirety of the piece is delivered to the audience sat end on. I was positioned on the side and due to blocking decisions, many gags, lyrics and performances were lost to me. This is a basic direction mistake and not what you expect from a well-credited director. There are some genuine laugh out loud moments, each packed with dramatic irony but as we meander towards the second half the piece dissolves into sketches that lack direction and ultimately get bogged down by its focus on the war in the Middle East. It loses any sense of the message or moral and trips itself up on the way to the finale, feeling much more pantomime than rock opera.

The musical numbers, on the whole, are delightful with some clever and amusing lyrics, highlights including an ode to Macro Economics from Gordon Brown, a delightfully morbid song, complete with choreography, about the People's Princess and an ever so intimate number between Blair and Bush describing their Special Relationship; each one inspired by classic musicals of yesteryear.

This is going to be a very marmite production with some revelling in the slapstick and nostalgic humour and others finding the silliness and social commentary to be underwhelming. If you are hot on your New Labour history and enjoy a waggish musical romp then there is something here for you but for me the questions of why we need a production like this and what is it trying to say remain unanswered.