A gritty display of desperation and discovery 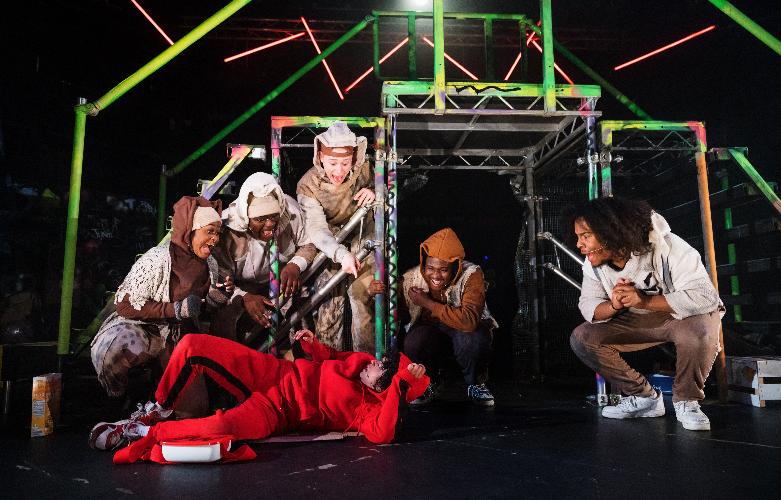 HighRise’s production of the original Rudyard Kipling’s (‘unDisnified’) Jungle Book creates a contemporary relevance of Mowgli’s search for community and belonging. Tired of the orphanage and her brother’s (Bagheera’s) feelings for teacher Miss Matthews, ‘Mo’ runs away into the wild to face all the challenges of the law of the concrete jungle. The journey twists and turns with energy and anticipation with the continual underscore of Kwame ‘KZ’ Kewi-Armah Jnr and Jack D’arcy producing a throbbing beat enhancing the visual conflicts and alliances formed in the jungle.

Due to unforeseen circumstances, the cast has had to rearrange roles to fill in for the main actor. Understudy Lauryn Louise bravely picks up the baton within 4 hours of losing the lead and gives an unfaltering Mo with scarcely a trace of the last-minute calamity. Louise’s nerve holds throughout the story with sturdy vocals and an incredible amount of content rapped with style and confidence beyond most shows of a similar genre.  Kudos goes to assistant director Fahd Shaft stepping into Louise’s original role and giving a top-class performance supporting the strong cast of 8.

Dominic Garfield’s direction is clear and concise, the story flows without a hitch, the ensemble nature of the piece gives a shared drive allowing for the change of cast. Garfield’s work with the ensemble to produce such shared adrenaline for a common goal is highly impressive and clear on stage that each individual is giving a 110%. Similarly, Yami Löfvenberg’s movement direction allows the performers to find a groove and freedom as they navigate the toxicity of the jungle.

Lesley Rietta Cobbina’s Baloo (also covering Miss Matthews) is a powerhouse performance as they storm the stage with presence and confidence. Cobinna’s vocals are a little weak for the drive of Baloo, but their physical journey is commendable. Similarly, Joseph Ra Lindsay’s Bagheera strikes a charming intimacy with the audience, immediately winning us on their side, you can tell the background in dance as they rap and embody the feeling of Kwei-Armah Jnr’s music.

Due to the cast change, Adrian Derrick-Palmer’s fight choreography falls well short. The team have done well to recoup a resemblance of the physical challenges Mo faces; however, the stage combat is weak and unimpressive – to no one’s fault. However, the team of jackals played by Jack Boal, Michael Mbozo, Che Campbell and Chè Gordon do a solid job of helping Louise find their way through the movement and choreography. Each of the jackals has their moment of impressive skill, Boal controls the stage as the mastermind of the group, Mbozo steals the stage with their veteran Kaa appearing high as a kite, Gordon’s intimidating aggression with rapid bars is unstoppable, Campbell’s comedy is charming and greatly required moments of relief.

HighRise’s Concrete Jungle Book at the pleasance is certainly one of the most energetic and fast-paced hidden shows in London. The fact this show can still go on despite the last-minute cast disaster is a testament to the quality of the creative team and ensemble.