A unique exploration of masculinity at the Soho Theatre 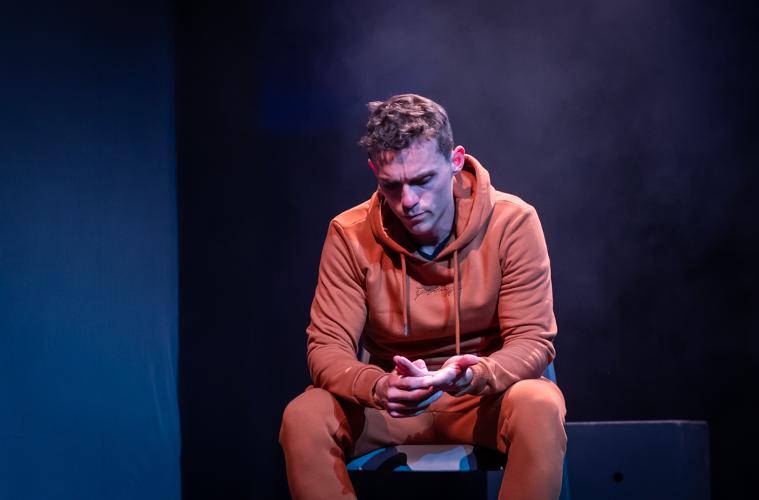 Review: Majid Mehdizadeh enters an almost black stage. Projections are the only thing that illuminates the Soho Upstairs Theatre as the protagonist of Y’MAM: YOUNG MAN’S ANGRY MOVEMENTS slowly begins to move his body to the imagery projected onto the black canvas. A synthesis of physical theatre and hyper-intense dance accompany the footage of a night out which pulls in the audience’s focus.

However, Mehdizadeh makes it hard to avert the eyes as he occupies the whole space, climbing onto chairs, closing in on the audience, and hiding behind the black canvas. He takes us by the hand as he dives into his one-man show, exploring a theme that takes its time to emerge. Out of countless childhood memories, and encounters with friends, lovers, and persons of authority, he pieces together the puzzle that is his internal struggle. Sometimes embedded in a catchy rap song, other times delivered as conversations with himself, but primarily in beautiful prose, Mehdizadeh unravels the origin of his uncontrollable anger – the urge to fight.

Mehdizadeh’s show – which he performs under his stage name Luke Jerdy – is a lot. It is messy, it is all over the place, and it uses approximately ten different storytelling techniques. Under Adam Welsh’s direction, it combines clever projections, multi-rolling, the occasional voice from the loudspeaker, movement choreographies, and a beautiful stream of consciousness delivered in spellbinding spoken word. It is not often you get to see such a naturalistic use of poetry while discussing such a raw and vulnerable concept as masculinity.

Mehdizadeh does it with absolute splendour. Effortlessly, he takes over the stage and makes it his eyes as he tries to find “the intro to the problem” without which the problem wouldn’t exist. The problem being: his recurring struggle to accept authority and resist the urge to fight it. He is assisted by Welsh’s spectacular soundscape which manages to take us from a traumatic memory of a park in Derbyshire to a nightclub in Hackney in less than a second.

How can we raise children without the toxicity that comes with being a man in “a man’s world”? That is the core of the piece, but there is so much more to it. The protagonist reminds us of that while he tries to find humour amongst the hot red anger and tunnel vision that has been his reality so many times. Directly connecting with the audience in pivotal moments and allowing us to see his inner turmoil, he never lets us out of his grip. And even though, Y’MAM jumps back and forth and asks us to follow it straight into the messiness that is Mehdizadeh’s past, the show rewards us for the chaos in the end.

Unlike anything, Y’MAM: YOUNG MAN’S ANGRY MOVEMENTS is a stunning marriage of performance styles that takes us on an unusual exploration of the roots of toxic masculinity – delivered in superb spoken word. Y’MAM has its finger on the pulse.