The Father and the Assassin - Review - National Theatre

An intense drama about Gandhi’s killer 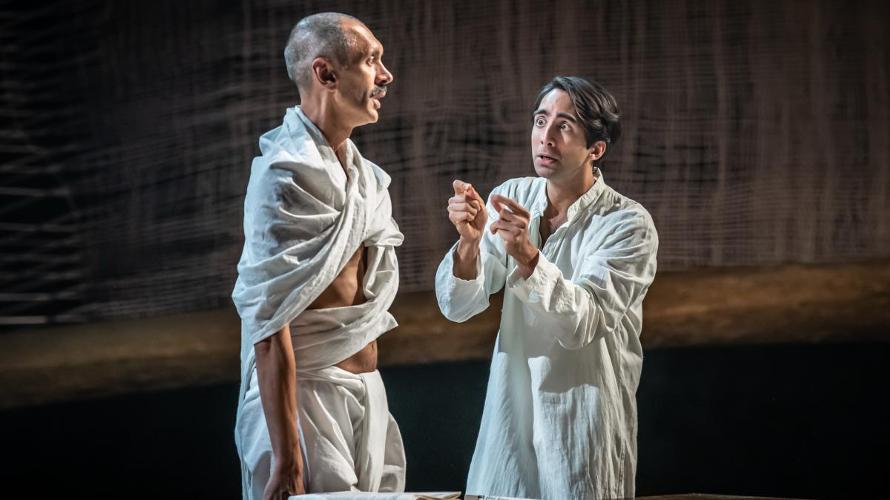 This fine new play by Anumpama Chandrasekhar follows Gandhi’s rise to influence up to his assassination in 1948, through the life and lens of Nathuram Godse. Exploring the impacts of oppressive British imperialism, the play is deepened by its tackling of universal, timeless themes of coexistence and revolution. Both the Hindu and Muslim populations of India feel like “second-class citizens in their own land” but in their fight for independence, will they break the bond of neighbour and fall prey to 1940s German notions of homogeneity and fear of one another?

This is the second show currently running on a main stage at the National that effectively employs a meta-theatrical narrator to guide us through the story. Shubham Saraf as Nathuram Godse is our protagonist, Gandhi’s Assassin, and our clever, playful host for the evening. The play is a star vehicle for Saraf who, despite being a murdering insurrectionist, displays great charm capturing and keeping the audience in the palm of his hand for the entirety of the play. His final moments in the piece, a nervous breakdown followed by a haunting call to action, are performed with great mastery. Told largely from Nathuram’s perspective, at one point Chandrasekhar appoints Dinita Gohil as a dashing and courageous Vimala, to hijack the story providing a more balanced view of the events. Also noteworthy is Ankur Bahl, who is utterly delightful as both Madhav and Kishore, filling the stage with childlike physicality and sassy wit.

Indhu Rubasingham’s staging of this play is exceptional. Swift and seamless transitions drive the story forward at rapid, exciting, and rarely achieved speed. In tandem with movement director, Lucy Cullingford, Rubasingham utilizes the ensemble in endless ways. Before the audience realizes it, they’ve snaked through the stage and changed the scenery. They peacefully protest and display a violent, albeit artful, clash between Hindus and Muslims. Their movement here, and throughout the entire piece, always establish a world revolving in constant motion, usually around Nathuram. This effect is supported by Alexander Caplen’s stirring sound design which adds great momentum to the impressively paced production. 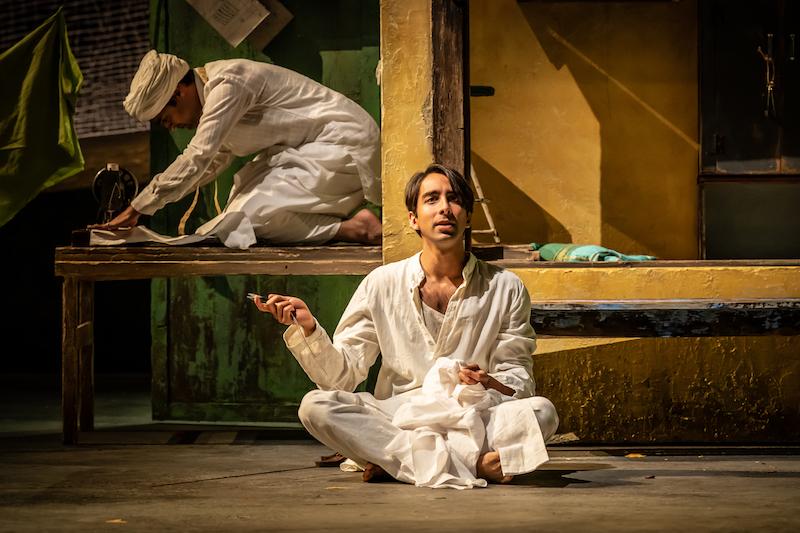 Rajha Shakiry’s set and costumes are impeccably designed. The costumes fill a gorgeous arid, earth tone set with vibrant garments associated with India: shimmering golds garbs, and flowing white linens. Shakiry’s set shapeshifts at astonishing speed. In seconds a jail cell appears, or a school, which then transforms into a shop like a Russian Matryoshka doll with hidden endless treasures inside. The ever-present revolve serves the Olivier space well and drives home a metaphor of the Earth spinning, time plowing forward, the cyclical nature of history, and stories repeating. Oliver Fenwick’s lighting design is swift, provocative, and timed to perfection. With a snap of Saraf’s fingers, day becomes night, or night becomes day, and a world is created.

The Father and the Assassin is an important play, honoring while critically examining the courage to face violence with love. Likewise, it warns of the danger in the desire to be remembered, the impulse to make one’s mark on history in order to avoid the sentence of having lived an ordinary life. This is only the debut of what will come to be considered a classic, performed for years to come. But like many of the National Theatre’s productions, I can’t imagine a more exquisite rendering than its very first, here on the Olivier stage. Don’t miss it.

The Father and the Assassin runs through 18 June in the Olivier at the National Theatre.