“Omigod you guys”, ‘Legally Blonde’ is back!  The 2007 musical is spending the summer in the Regent’s Park Open Air Theatre, and comes with a daring new vision from Lucy Moss (co-creator of global megahit Six).

With music and lyrics by husband and wife team Laurence O’Keefe and Nell Benjamin, and a book by Heather Hach, the show follows Californian blonde Elle Woods (Courtney Bowman) on her journey of self-discovery after being dumped by boyfriend Warner.  She follows him to Harvard Law, learning as much as she can in order to win him back (including assisting on a murder trial), but ends up learning even more about herself.

Director Lucy Moss has made some bold choices with her production, which come with mixed success.  Blowing the casting bracket wide open, Moss fills the show with an eclectic and diverse cast that defies the musical’s previous conventions when it comes to gender, race, body type and even species (Elle’s beloved chihuahua Bruiser and Paulette’s poodle Rufus are now played by actors in dog costumes, which audiences will either find hilarious or, more likely, a gimmick too far).  With such a spotlight on diversity and inclusion in today’s society, such changes are important, but also need to work within the context of the show.  Most are highly successful - it doesn’t matter in the slightest that Bowman is curvier than historical Elles, or that Paulette, Emmett and Elle are played here by black actors rather than as per previous portrayals.  Most roles in theatre could (and should) be played by any ethnicity or body type unless it’s integral to the plot, and all of the actors do a great job here.  Perhaps Moss’ boldest move is having Margot played by a non-binary performer (Isaac Hesketh), again breaking new ground.  Hesketh gives an energetic performance, but struggles with the high key of the vocals, doing them and the show a disservice.  Hesketh is clearly talented and gives their all, but it’s a casting decision that doesn’t fully achieve what it sets out to do. 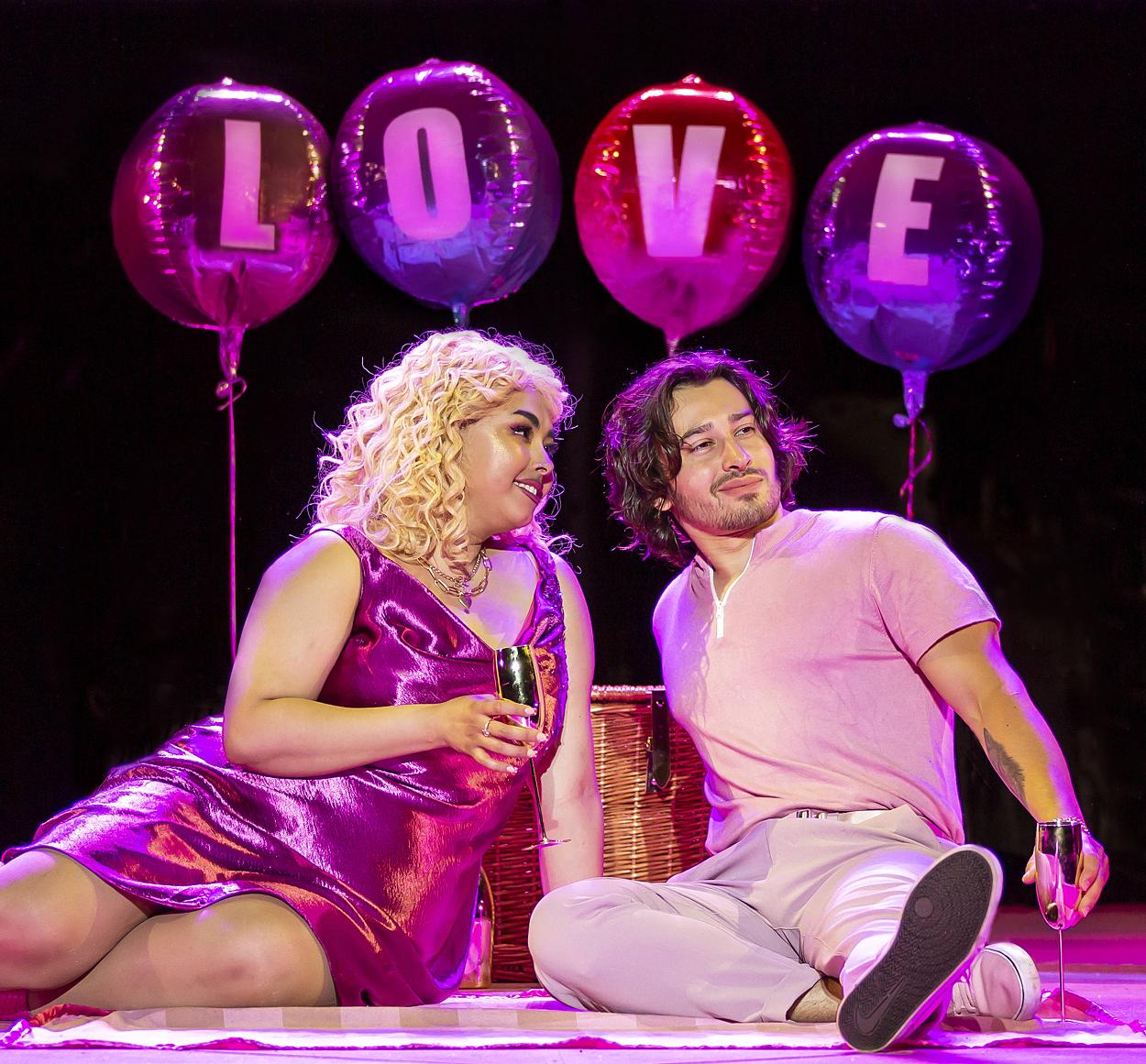 Elsewhere in the cast, Lauren Drew deserves major props for getting through fitness instructor Brooke’s “Whipped Into Shape” song and exercise routine and making it look effortless, barely being out of breath at the end while delivering a consistently strong vocal.  Michael Ahomka-Lindsay is great as Emmett, although he outshines Alistair Toovey’s Warner in terms of natural charm and confidence, and it almost feels like they should’ve been cast the other way around.  Nadine Higgin as Paulette is perhaps the standout, full of Beyonce-esque sassy fierceness and being an absolute joy to watch, while also belting the life out of “Ireland”.  And as for Bowman, her take on a reimagined Elle is strong, likeable and warm.  She doesn’t always capture the vulnerability of the character (it’s a very fine line to not turn Elle into a vain unlikable void), but her voice sounds great, she aces the comedy, and has great chemistry with Ahomka-Lindsay and Higgin.

Moss’ decisions around the aesthetic of the show are somewhat questionable.  Unfortunately the set (designed by Laura Hopkins) makes no sense and is unappealing to look at, being adorned explicably in strips of fringing that look like straw and conjuring up images of Oklahoma rather than California.  Costumes and wigs (by Queen Bee and Jean Chan) also fall far short of the standard expected of a London show, with most looking cheap and unfortunately naff.  Elle’s in particular are intrusively out of character.  She is a fashionista who studies magazines and has the eye for style, and it’s hard to believe she would ever set foot outside in most of the outfits she’s presented in here.  It is noted in one song “you have the best freakin’ shoes”, when in reality, she really doesn’t.  She also clearly understands how important fashion and style are when presenting the best version of oneself in the proper environment (as she demonstrates in her makeover of Emmett), so the decision to have her wear a cheap-looking midriff-exposing top and short skirt in the middle of a murder trial is completely baffling.  Bowman would look great in pretty much anything, her body shape shouldn’t be limited to the outfits she’s stuck with here.  It all adds up to a vision that doesn’t ring true with the character we know and love, and unfortunately tarnishes the show significantly.

Fortunately, ‘Legally Blonde’s strong score and likeable characters outweigh the negatives of how the show looks, and it delivers an enjoyable night out.  Its message of being true to yourself despite the opinions of others will always be relevant, and this diverse and inclusive production helps to bring that home even more.  It’s a shame the show looks the way it does, and the dog costumes were a mistake, but if ‘Legally Blonde’ teaches us anything, it’s to look beyond the surface, and the heart of this musical remains as strong as ever. 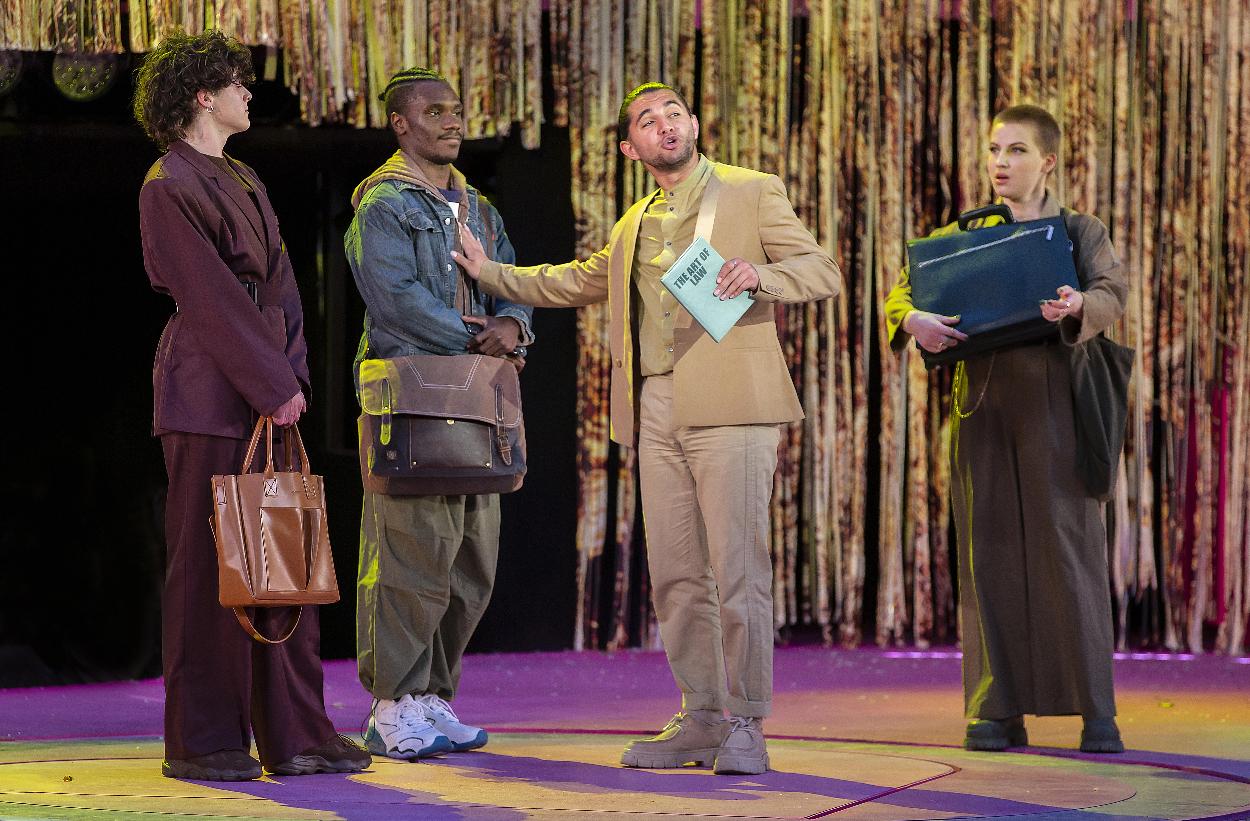