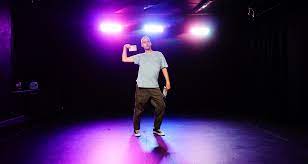 Joe Hayward is a comedian. Lost in the world of insurance, living at home and a man called Tin (not to be confused with Tim), Joe strives to make his comedy dreams come true.

The play begins with our protagonist, Joe (Kit Loyd) going into an audition room. He is hit with an array of directions from the casting director, including a direction of becoming and embodying a tadpole. The facial expressions and excellent physical direction from Hamish Clayton create an enjoyably mad scene, where Loyd demonstrates how truly difficult it is to be an auditioning creative.

The play goes on to display Joe’s absurd week, wherein he tries to put on a play (his own play being Gosh!), is hit with a speeding bill of £400 and meets his mum’s new boyfriend, Tin. The comedy shines through with Loyd’s impressive grasp on physicality and ability to combine clowning with stand-up comedy.

Despite the perfected comedic timing and Loyd’s commitment and energy throughout the hour, the plot and length of certain scenes could have been tidied. It would have been more enjoyable to watch Loyd perform more of the characters; an example is when he switched between performing himself and performing Tin.

Overall, gosh! is a fun and unique play, great for an evening out and a drink in hand.